"One thing is clear, I must kill them!"

Wyverns are powerful adversaries, possessing mighty physical and magickal attacks, the means of flight, and the ability to breathe lightning to stun their foes. They can seize control over the will of Pawns to turn them against the Arisen. The Wyvern bears a glowing spot on its back where its heart resides, which serves as an exploitable weakness.

One of the smaller cousins of the titular Dragon. Wyverns are a species of the lesser dragon type, along with the Drake and Wyrm. The Wyvern's heart is located on its back - thus if mounted when aloft, the Wyvern will make strong attempts to throw the attacker off. Unlike their Drake cousins, Wyverns do not breathe fire, they instead use a strong lightning based breath attack which can throw their foes into the air. Consequently, they are significantly resistant to the thunder element. Wyverns are strong flyers and can cast spells, though these are less powerful than the Wyrms'.

Defeating a Wyvern has a minor chance of dragon forging the Arisen's equipment, as long as it has at least one level of enhancement. 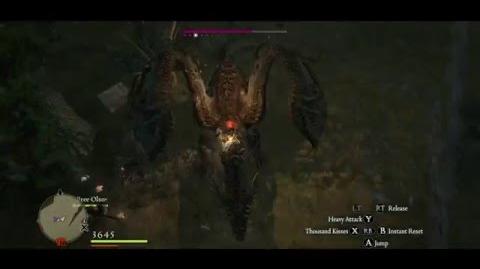 How to lure down the Wyvern on Conquest Road (Post-Game). Technique A
Already aware of the location of the Wyvern's roosting spot (slightly east of Conquest Road), the Arisen runs directly to the Wyvern, jumps up and grabs onto it. Once the Wyvern takes flight, it is very difficult to lure it into landing instead of fleeing to the Bluemoon Tower. Attack the heart on its back in order to slay the Wyvern. The Wyvern's roosting spot is marked on the map at the beginning and end of the video. 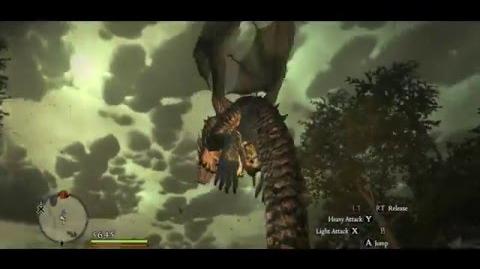 How to lure down the Wyvern on Conquest Road (Post-Game). Technique B
Because the Wyvern tends to flee, be sure to save the game before approaching Conquest Road. Stand on an elevated platform near the Snow Harpies and wait for the Wyvern to land. If it hovers low enough, grab its tail and climb up to its back to attack the heart.

In addition to witnessing these techniques, it is necessary for Pawns to participate in killing 15 Wyverns either with their own Arisen or while travelling with others.

Kills on Thunderwyverns also count towards the overall kill count since they are of the same species, but the Thunderwyvern is much stronger than the Wyvern or special Wyvern.

Pawns battle advice on Wyverns shares much with their advice on Drakes, with the exception of that on the Drake's fire breath. Advice unique to the Wyvern includes :

The Wyvern shares some dialogue with the Drake and Wyrm.

At the Bluemoon tower