Wolf is an Enemy in Dragon's Dogma.

Wolves are hostile fauna found commonly in Gransys. Individually they are a minor danger, but in packs they can easily waylay any unwary traveller. Direwolves are a fiercer white subspecies found in colder northerly parts.

"Wolves can be found in every corner of the earth. They are carnivorous mammals from the Canis genus and commonly reach around 6 feet from snout to tail. They are not mystical creatures nor monsters, but their ferociously brutal nature separates them from their fellow animals.

Thanks to their social nature, wolves live in packs of up to a dozen individuals. An alpha male leads the pack and each pack seems to have its own demarcated territory. Wolves spend most of their time wandering within their pack’s territory in search of prey..

Wolves are quick and clever, more so than most animals, and so you will need to use caution to avoid their agile attacks. It used to be that wolves would not recklessly attack humans without provocation, but it is believed that the recent increase in monsters has caused their new hostility."
―Capcom official description[1]

The wolfen alpha is twice as large, with increased attack and defense.

When an interloper is spotted in their territory, wolves will howl to alert their pack members. Wolf hunting behaviour includes much dashing, circling and harassing.

In addition to witnessing these techniques, it is necessary for Pawns to participate in killing 500 Wolves either with their own Arisen or while travelling with others.

"They're quick, these dogs..." (no Bestiary knowledge)
"Wolf pack!"
"Wolves hunt in packs!"
"Certainly its pack draws near."
"They're nimble. Watch your back."
"They're open after a blocked lunge!"
"Wolves fall quickly to flames!"
"Watch their bahavior, then take careful aim!"
"Don't allow them to surround you!"
"It flees..." 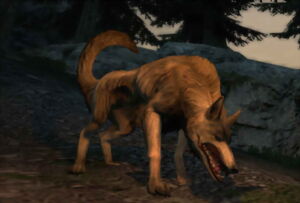 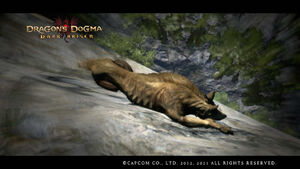 Retrieved from "https://dragonsdogma.fandom.com/wiki/Wolf?oldid=320029"
Community content is available under CC-BY-SA unless otherwise noted.