Windworn Valley is a location in Dragon's Dogma.

The Windworn Valley is a narrow valley running northeast to southwest in the northern regions of Gransys - it runs from beyond The Blighted Manse to the entrance of Pastona Cavern.

The fierce winds that blow in the valley make it difficult to move. Snow Harpies and some Direwolves inhabit the valley. A number of herb species may be found here - the rarer ones being Destiny Grass and Windmill Flower.

Roughly half way along the valley is a quiet area with low winds - the Rest Camp known as Travelers' Rest can be found here, stationed by Ser Octavio. In the camp are also a Riftstone and Knowledge Chair.

There are two interesting Weapon/Armor Piles just at the end, right after the "windworn" corridor.

There are also a Wakestone Shard and an Ore deposit in the dead-end running between those piles.

" 'Tis difficult to walk such a narrow path."

"The winds here are strong, though they ease as one climbs higher."

"There's little sign of looting. Perhaps the wins have kept thieves at bay." 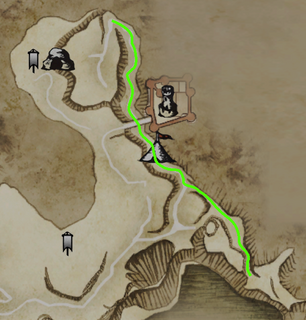 Route of the valley - there is respite from the wind at the Travelers' rest
Add a photo to this gallery
Retrieved from "https://dragonsdogma.fandom.com/wiki/Windworn_Valley?oldid=308595"
Community content is available under CC-BY-SA unless otherwise noted.