Supply and Demands
Pride Before a Fall
Windbluff Tower is a location in Dragon's Dogma.

A decaying fortress nestled on a cliff north of Gran Soren, also known as "The Stone of the North".
Appears to serve as a northern strong point for Gran Soren troops.

My band of thieves and I once traveled past Windbluff Tower. It just so happened that a griffin attacked at the same time. I thought we would die at its claws, but the soldiers of the tower fought it off expertly. Men are not worthy of trust, this I know. But on that day they saved my life, and we all felt gratitude. Chances are we're not the last people that Windbluff Tower will defend from monstrous beasts.
Ophis[1]

Ser Daerio is the leader of the Windbluff Tower men, the other soldiers are :

There are several chests around the tower :

The soldiers stationed here have Escort Quests that start from the Union Inn notice board in Gran Soren. They are available as early as the quest Lure of the Abyss, except for the fort's commander Ser Daerio, whose escort quest will start at a later point. Ser Gabrian and Ser Castor both want to go to the Miasmic Haunt. The other soldiers all want to go to Hillfigure Knoll. Quest rewards are special arrows, or 10,000 gold.

"A stronghold, here? What could it be meant to defend?"
"The best men in the strongest hold are powerless without supplies to live on."
"Even the dragon's coming is not enough to unite men's hearts as one."
"The walls bear heavy scars... I fear 'tis too late to mend them."
"Gran Soren guards, so far from the capital?"
" 'Twas once a place under heavy watch. Best we were no less vigilant now."
"Seems the duke aims to ring all Gransys with strongholds..." 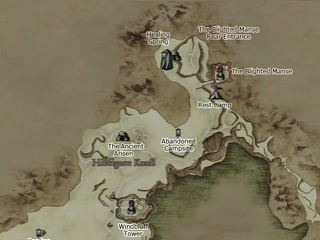