Wilted Forest is a location in Dragon's Dogma.

"A desolate place where the Undead are known to prowl at night. It is home to The Abbey, where Sisters of The Faith ensconce themselves in quiet contemplation. Quite why they chose such a remote and dangerous location is unknown. Of course, it may be that in times past the forest was a far safer place".

The Wilted Forest is a small forested region to the west of Gran Soren. As the name suggests, the trees here appear to be dead or dying, and are devoid of leaves.

The Abbey is the only human habitation within the forest, home to a number of nuns; to the northwest of it is the Prayer Falls - northwest across the forest river is the Cursewood.

The forest is home to Deer, Spiders, and Crows during the day - on the southeastern part a band of Bandits have made their camp, and set up Tripwires - at the southern edge, close to the north entrance to The Ancient Quarry is a pack of Goblins and a Chimera.

At night the entire area 'erupts' with the undead of all types as well as two Ogres that replace the Chimera and a further two Ogres just northwest of the Abbey.

For loot north of the forest path and loot near the river, see Cursewood and Deos Hills.

Plant species native to the forest are :

Quests requiring the slaying of creatures that inhabit the forest at night:

"I hear aught moving about the wood..."
"An abbey, here? It seems a dangerous place for such pursuits."
"How deep do you suppose it is?"
"What evil does this sense of foreboding portend?"
"A wealth of materials lies close, I believe. Let's have a look."
"Monsters..? Or bandits, else? 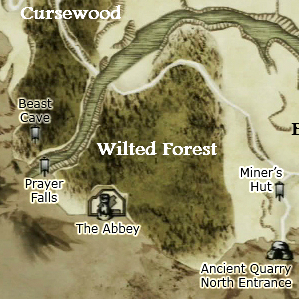 Add a photo to this gallery
Retrieved from "https://dragonsdogma.fandom.com/wiki/Wilted_Forest?oldid=314821"
Community content is available under CC-BY-SA unless otherwise noted.