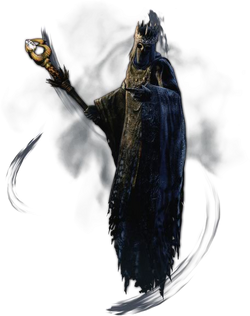 Wight is an Enemy in Dragon's Dogma.

The Wight is a higher level undead Spellcaster. Wights wear a heavily worn out Dalmatica and Crowned Hood along with a mask that covers half of their skeletal face. All Wights wield the Plucked Heart Archistaff. They are always in flight, which makes them difficult targets for melee characters.

" Wights are born as a result of sorcerers who, in pursuit of immortality, subject their own bodies to forbidden magicks and are cursed to live even in death.

Unlike skeletons, which are propelled by nothing more than inorganic impulses, wights clearly possess their own minds, losing none of their intelligence or sorcery after death. All of the magicks which they use are powerful and, thanks to their former lives as sorcerers, it takes little time for them finish their incantations.

Wights can even summon undead and skeletons to serve them strategically, using their magic to make these servants stronger and provide them with protection. Wights are usually seen floating in the air thanks to their powerful magicks and they are agile as well. Since their bodies are already dead, they are unfettered by pain or exhaustion and you will wish to avoid prolonged battles with these monsters.

It is said among adventurers that wights are what become of sorcerers who desired to know the truth of all the world. They have only rarely been sighted and one theory is that they put barriers up to hide themselves from the undeserving, thus unworthy adventurers will never even see them."
―Capcom official description [1]

Some wights only use certain spells - the Miasmic Swamp wight only casts Unholy Bolt and Unholy Anodyne; whilst different Wights summon different allies - the Deos Hills wight summons skeleton spellcasters and warriors, whilst the Barta Crags creature summons only warriors.

The scroll Wight Tactics may grant knowledge for this enemy.

In addition to witnessing these techniques, it is necessary for Pawns to participate in killing 30 Wights either with their own Arisen or while travelling with others.

"A host of wights!"
"We've poor luck... Wights, Arisen!"
"We must seal that magick!"
"What magick is this? I fear the answer..."
"'Tis a mighty spellcaster!"
"There, floating! 'Tis an evil almost palpable."
"The undead are weak to holy light!"
"That spell is trouble... Quickly, away!"
"'Tis aground! All hands, attack!"

Wight in The Bloodless Stockade:

Retrieved from "https://dragonsdogma.fandom.com/wiki/Wight?oldid=316801"
Community content is available under CC-BY-SA unless otherwise noted.