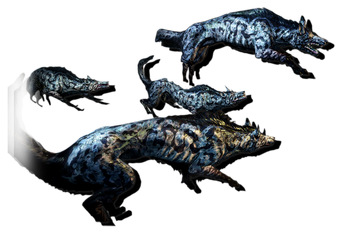 Warg is an Enemy in Dragon's Dogma: Dark Arisen.

Wargs are a slightly larger version of the common Wolf with bluish-grey black-mottled fur that can be found on Bitterblack Isle.

Wargs are neither strong nor hardy, but very agile and often dodge attacks directed at them. They hunt in packs, just like their cousins; their bite reliably inflicts Poison, and sometimes also Torpor.

In addition to witnessing these techniques, it may be necessary for Pawns to participate in killing 200 Wargs and to obtain a combined kill count with Garm of 300, either with their own Arisen or while travelling with others.

"That wolf's hide is rot through."
"That beast looks fierce indeed..."
"An injured wolf, or...?" (no bestiary knowledge)
"Wargs!"
"Their bite bears a wicked venom!"
"Ready the mithridate! Their bite brings poison!"
"Beware their putrid bite!"
" 'Tis fast... Be wary, Arisen!"
"Keep well clear of those fangs!"

Retrieved from "https://dragonsdogma.fandom.com/wiki/Warg?oldid=312393"
Community content is available under CC-BY-SA unless otherwise noted.