Ward of Regret is a location in Dragon's Dogma: Dark Arisen.

The Ward of Regret is an area located on Bitterblack Isle. It connects the Midnight Helix and Duskmoon Tower.

There is a broken Riftstone in the southern area behind some gates which may be restored for 3,500 Rift Crystals.

Initially the area around the Riftstone with a quarter circle ground plan is inhabited by Giant Undead, with Skeleton Lords within the locked chambers, as well as a pair of Skeleton Sorcerers. Further in the path along wooden boards over the underground water reservoir has a chest that has become the permanent residence of a Maneater.

A broken wall and rough tunnel leads further into the area, with an alternative shortcut that is initially locked via a lever operated barred gate (marked on the in-game map with an "!"). The short tunnel is infested with Giant Bats, and the room leading to the shortcut by Spiders.

The shortcut must be unlocked from the far side, and requires a high leap. Climbing tall creatures, levitate, Double Vault, or Barrel stacking may all help.

The further part of the ward is home to a troop of Skeletons led by a Skeleton Brute, and two further groups of Giant Undead and Skeleton Lords.

The exit room leading to the Midnight Helix contains several Hanging Bodies, and usually a few undead and spellcasting skeletons.

Furthermore, an Elder Ogre may occasionally appear in the passages here if the remains of other creatures attract it.

For chest locations and contents see the map and table below.

A Macabre Sculpture can be found here.

Gatherable items include Bitterblack Weapon Lv.1, Bitterblack Gear Lv.2, Bitterblack Novelty Lv.3, as well as a Dalmatica, or a Laurel Circlet from a Weapon/Armor Pile 03 and Noble Earring from 02. Items found lying around include Airtight Flask, and Staminal Drench; whilst items found in breakable items such as crates include Demon's Periapt, Interventive, Coin Purse of Charity, Moldy Carrot, and Rusted Daggers. 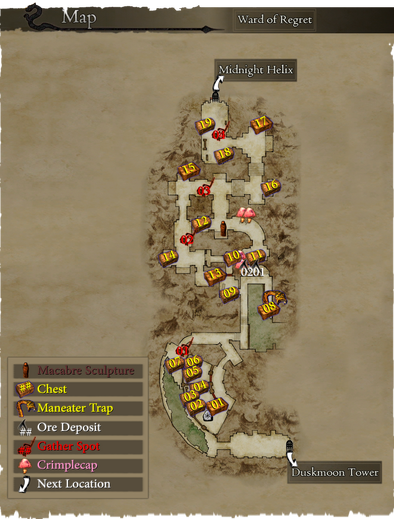 "Our foes are fearsome strong. Best we made a point of treating any wounds immediately."

"Even the same path can offer different views 'tween coming and going."

"Let us be doubly sure to collect any spoils left after the fight."

Retrieved from "https://dragonsdogma.fandom.com/wiki/Ward_of_Regret?oldid=317468"
Community content is available under CC-BY-SA unless otherwise noted.