Vestad Hills is a location in Dragon's Dogma.

The Vestad Hills is a small hilly partially forested region in the southwestern part of Gransys. The hills are reached via a high mountain pass, prone to boulders, which connects to the Manamia Trail to the east; to the west across the stream running down from Nightcall Crevasse are the Verda Woodlands, with the Eradication Site between the two. Witchwood's western entrance is accessed via a road through the hills.

The wooded area of the hills to the west are home to a large Saurian population, and a Chimera, whilst the eastern part and main roads are infested with bandits, based at The Ruins of Aernst Castle. East of the castle, the hills lead down to the coast, here are more bandits and a Cyclops.

The east–west road to the Verda Woodlands and much of the land west of the castle is infested with Goblins and Hobgoblins.

At night, northeast of the castle Wolves are numerous both on and off the roads.

Near the Eradication Site are a herd of Oxen, and a Griffin hunts here (replaced by a Cockatrice during Post-Game).

There are few rare minable ores in the region, the most common plant is Southron Oregano, near the coast east of the castle a few Shiverberrys may be found. The wooded area is one of few in Gransys where Beech Branches can be found.

"This road offers a fine view of the area."
"That river must lead to the sea."
"Feel that salty breeze. We must be nearing sea."
"A bandit of the Stone yet remains in Cassardis, yes?"
"Shall we jump? It might shorten our path. ...Or our lives."
"I sense monsters all around... If we enter the forest, go ready for battle."
"A fetching view for certain, but I fear we're quite vulnerable here." 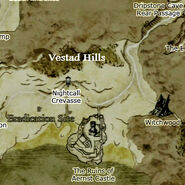 Add a photo to this gallery
Retrieved from "https://dragonsdogma.fandom.com/wiki/Vestad_Hills?oldid=314364"
Community content is available under CC-BY-SA unless otherwise noted.