Verda Woodlands is a location in Dragon's Dogma.

The Verda Woodlands are a large region in the southwestern of Gransys. The region is home to a considerable Goblin population.

There are two routes from the more populous regions of Gransys to the Verda Woodlands - west from Manamia Trail via a bandit infested mountain path and the Vestad Hills leading to the eastern edge of the Woodlands; or via The Ancient Quarry through the southern fringe of Devilfire Grove.

There are numerous named locations in the sparsely populated region: the Eradication Site is at the western edge, a site of a battle, now inhabited by Oxen which are preyed upon by a Griffin periodically; the Travelers' Camp, a small campsite; the Miner's Toolshed; and a number of unnamed Goblin camps along the roads and paths in the region. Directly north of the Toolshed are eventually steep cliffs, prone to boulders.

The southern edge of the Woodlands meets the sea off Gransys, with three points of note - from west to east: the Caverns of Delusion are accessed via a narrow crevasse leading down to the sea; the unusual rock formation at the Tomb of the Unknown Traveler overlooks the ocean, and is home of a Golem; at the far west is Bloodwater Beach. Both ocean side beaches are good places to attempt to catch Giant Fish.

Bloodwater Beach is accessed via a narrow gorge leading down from the Conqueror's Sanctuary, along the path is a small unnamed cave and ledge in a small opening in the gorge - see Noonflower Cliff Cave.

The Healing Spring is infested with more Goblins and at night, this part of the woods additionally becomes haunted by Specters. To the east of the spring, a Chimera prowls the woods.

In Post-Game, a Cockatrice replaces the Griffin at the Eradication Site and a special lesser Drake replaces the Goblins and Cyclopes at the Conqueror's Sanctuary.

Southron Oregano is the most common herb; Grandgrapes are also common here, and along the cliffs Capeflowers and Strongwarish can be found, also some Shiverberries.

Logs here may give Chestnut Branch or Beech Branch. Wood bundles at Travelers' Camp and those on a hillock few meters to the South from it can give a Large Coin Pouch, Giant Coin Pouch, Jewel of Time, Jewel of Silence, or Jewel of Darkness, but only at night.

"All this open space spurs the desire to run, aimless and free."
"'Tis a relief to need not fear an ambush."
"Cast a monster down below and it won't soon return."
"I cannot see another shore... Do you suppose the sea continues into eternity?"
"If we tread carefully, I'm certain a way forward will present itself."
"Small caves such as this oft hold items of some use."
"Hmm... We might find aught of use here, Master. I suggest we search." (by the Caverns of Delusion)
"Idle too long, and the sun may set on our errand. Be wary."
"This place... I cannot help but recall that fateful day in Cassardis..."
"Watch the ground for traps, goblins have strung the area with them."
"Were they placed here by men? For some ritual, perhaps? (at the Tomb of the Unknown Traveler)
"We've come far enough we needn't fret about losing our way, mm?"
"These woods see few visitors, hence all the monsters and rare materials."
"Were we not just here? All these paths look the same..."
"I feel we do not belong here. These woods are like a different world."
"This is deer country. If you've a taste for venison, we should hunt." (south of the Healing Spring)
"It's dark... Where are we to go from here?" (at Travelers' Camp at night) 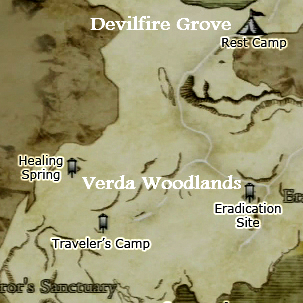 Retrieved from "https://dragonsdogma.fandom.com/wiki/Verda_Woodlands?oldid=312813"
Community content is available under CC-BY-SA unless otherwise noted.