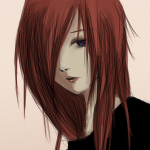 aka The Shadow Kiwi

Hi, welcome to Dragon's Dogma Wiki! Thanks for your edit to the Dark Lorica page.

It appears that the trivia statement has been removed by another wikia contributor. Between you noticing that and the other contributor deleting it, I would say that it has been confirmed that there is more than one option for changing each eye color. Thanks.

There is also a Character Customization category page that is blank. You are welcome to input your suggestions and any information you have at the top of the page.

I mean no disrespect...but...what you had said on your profile page....just blew my brains out... =@

hahaha your kind message doesnt deserve to be left unresponded....I hardly said anything worth thanking...though ....i really cant shake the feeling of being the cupcake now...just a question... why cupcake? did you like it?... Why not truffle? or maybe even a Giant-normous hershy chicklate bar! ^_^

a cup cake that materializes in a world of nothing-ness....and rotates on its lateral axis...hmmm...

oh yes...it isnt difficult to see a person as a cupcake...just get him to wear on of those fluffy suits...and knock him over on his back...ahhahah...oh adding on to truffles..hmm..i would believe having a peanut butter core...is... remarkably-heavenly....oh gosh...^_^

i saw someof ur edits.. u def know what ur doing in this game.. we should fight the ur-d sometime, im looking for a few pieces of equipment including a dark lorica. let me know if there is anything u r looking for in particularBboyCID (talk) 23:47, January 10, 2013 (UTC)

HEY!! Kagekiwi! What a coincidence! Was gonna do the moonstone page...but then..POP! it appeared on screen, so i immediately got to putting the image in! Ultra Snail FTW!

send me ur psn plz

oh ok thats alright thanks for the reply =)

Dont mean to be a bother, but are you on xbox or psn?

Well, i would like to you if you were on xbox.

Yeah it rewards a Bastard Sword. It's how I got it on my first playthrough. And I also avoid them now unless I happen to go to the specific location. Escort quests suck. And if I want a Bastard Sword I go pick up the one from Soulflayer Canyon. Good sword. :)
AeonsLegend (talk) 20:20, January 15, 2013 (UTC)

Of course not :) Go ahead and add to the pages. If I had the info I would have added it right away. I was at Bloodwater Beach yesterday and forgot to update the page so I couldn't remember all of it.

You wouldnt believe it

Congrats on making AOTM! You've been doing some good work on the wiki.

You're doing a great job on updating the pages with missing info. I'd like to suggest a different format to the edits of enhancement item locations. See Half Chain Hosen#Enhancement Item Locations to see what I mean. I changed the format a bit so it's easier to read. I think it's best to stick to this type of formatting so readers can find what they need more easily. Let me know what you think.

I don't really think it's necessary to give a heads up to the admins as it's not so much a page architectural change, but more of a formatting thing. I don't really have an opinion on the added locations. They should be listed on the linked page like say the page: Saurian, has it's location already in the page itself. That should be sufficient. Although there is something to say for having the information on the exact location listed as well. That way people have the info at hand when they read it without the need to consult further pages. Still spreading out information over multiple pages is prone to errors and such, although I caught myself doing both as well. I myself am fine with both, but for the sake of consistency we should choose either one. What's your take?
AeonsLegend (contact me) 20:43, February 11, 2013 (UTC)

vandalism reports go to either Obsidian or Balagog gro-Nolob. Just re-read the edit and it's definitely vandalism. A small tip for future edits. You have the option to revert someone's edit's to the previous editor. Be careful when you do this though as it will remove all edits by the same person and not just the last if you choose "Rollback" instead of "Undo". An example:

Choosing rollback will remove both edit 1 and edit 2.

In your case it would have worked fine as only the unkown person edited 1 time.

You can also choose "undo", which should only remove the latest edit.

As for the reference you mentioned can you give an example of what you mean?

Thank You Kagekiwi. Good eye on the vandalism!

hey there! do u by chance happen to know what torso armor does Barroch(the npc that rarefies items) is wearing?

Hey, I have no idea, all my characters are females and nothing match to his armor, maybe its exclusive to him, unavaiable for players (future dlc lol).
Jurass (talk) 15:55, May 10, 2013 (UTC)

Hey there! Unfortunately I haven't got a clue as to what Barroch's armour is either. I haven't actually got to Bitterblack Isle yet, so didn't know who he was, but a visit to his page soon sorted that haha.

I've had a look through the Torso Armor we have on here and none of them resemble what he's wearing. It's the same sort of 'build/shape' as the jackets (Hunter/Lamellar etc), but the design/style is completely different; far more ornate.

Agreed with Jurass that it's likely his and his alone at current, up until it's later released for us to buy I'm sure haha. It does sorta surprise me that he's wearing the Beastly Mantle what with it not being something new, since then we wouldn't be able to receive his armour in one of those 'set of' type things (like with Reynard's, Madeleine's etc), but it could still work if released as separate pieces of course. Artirtico (talk) 18:43, May 10, 2013 (UTC)

Hey, yeah Since its capcom so we might get that armor as a dlc . lol

Retrieved from "https://dragonsdogma.fandom.com/wiki/User_talk:Kagekiwi?oldid=118846"
Community content is available under CC-BY-SA unless otherwise noted.