Dragon’s Dogma director Hideaki Itsuno has made comparisons between his game’s pawn system and old-school bulletin board systems in the past. The full extent to which yesterday’s information tech informed Dragon’s Dogma’s development was made clear at his GDC talk today. Much of what Itsuno discussed during Behind the Scenes of Dragon’s Dogma was intended to elucidate his team’s process for developing this unusual open-world RPG, for the benefit of fellow game makers in attendance. In the process, though, he divulged some truly fascinating tidbits on the game, and how it evolved throughout its development. Highlights follow: 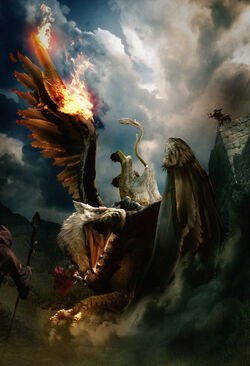 Throughout his presentation, Itsuno played internal concept and development videos that I really wish you folks could see. One, a tech demo made to internally showcase the game’s character customization feature, ended with a J-pop dance routine by a gaggle of cyclopses of varying sizes. The presentation slides were also decorated with never-before-seen concept art, which my phone camera wasn’t quite able to capture. I’m trying my darndest to get my hands on them, however!

From the sounds of it, there was a quite a bit left on the cutting room floor at the end of Dragon’s Dogma’s development. The game was evidently a success, though. Itusno mentioned the one million units the game sold globally, and stressed that fans continually clamor for a sequel. So who knows? Maybe some lunar jaunts are in the Arisen’s future before too long.