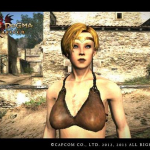 In anticipation of Dragon's Dogma Online coming out for the PC and PS4 in Japan only, I'm hopeful that eventually Capcom will release it in the US for the PS4 as well (perhaps by Christmas?).

If they ever decide to do so, this one single game will be the reason I finally decide to buy a next generation console. Fingers crossed !

My favorite things in Dragon's Dogma:

Funniest thing that's happened to me in the game recently (April 2015) : Beginning a New Game in Hard Mode (fourth alt), I've been dying of laughter whenever my Lv 10 Mage Arisen gets slain by a mere Goblin near Cassardis. I've also been killed a few times by the BATS (!) in the Dripstone Cavern beneath Cassardis (until I decided to simply run past them). Good times.

Favorite skill : Brain Splitter with the Eminence augment is RIDICULOUS. Most monsters can be slain in only 1-3 jumps with this skill (no periapts). Use Instant Reset between jumps to spam this skill even faster !

Most underappreciated skill (by most other players) : Instant Reset, as a dagger vocation. Whenever I get struck (which is rare), I don't like waiting for my Arisen to recover before I can counterattack.

Favorite spell : High Maelstrom. It's the easiest way to level up ! On Hard Mode with a Blessed Flower (Weal), walk into the Rotunda of Dread, cast High Maelstrom from the stairs, and just leave. If possible, bring only the Main Pawn to gain levels even faster.

Favorite dungeon : The Catacombs (Resident Dogma !). I just wish there was more quests to do there.

Favorite game secrets I learned from this Wiki: the amazing usefulness of a Rusted Bow and the Legion's Might staff, learning how to properly farm Cursed Dragons, the importance of proper pawn inclinations and enjoying the generosity of my fellow gamers who share my love for Dragon's Dogma.

Thank you to the creators of this Wiki! Mwah mwah mwah (blowing kisses) !

My pawns are synched to Challenger/Mitigator inclinations. Enemies below are grouped by type :

Retrieved from "https://dragonsdogma.fandom.com/wiki/User:Jonggonzales1?oldid=231671"
Community content is available under CC-BY-SA unless otherwise noted.