Urban Quarter is a location in Dragon's Dogma.

The Urban Quarter is a district of Gran Soren. The Fountain Square is an extensive part of its area. It is primarily centralized among the other districts of the city being that it borders and provides access to the Venery, Craftsman's Quarter, Noble Quarter (via the Castle Gate), and also some parts of the Aqueduct. It also provides an exit/entrance to the city at the southern part of its district.

Several useful businesses are run from the buildings around Fountain Square. These include:

During Post-Game much of this quarter is destroyed by the cataclysm following the defeat of the Dragon. The Union Inn and Devyn's shop are destroyed and the survivors move to the Craftsman's Quarter.

As the Venery is almost totally destroyed Mountebank sets up in business in what remains of the Alehouse. 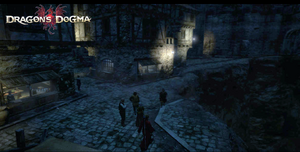 The Urban Quarter post-game
Add a photo to this gallery
Retrieved from "https://dragonsdogma.fandom.com/wiki/Urban_Quarter?oldid=277675"
Community content is available under CC-BY-SA unless otherwise noted.