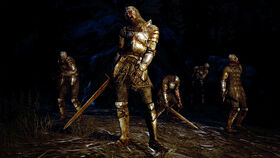 The reanimated remains of once valiant Warriors, these unholy beings are a pale shadow of their former selves. They carry the armor and weapons of their past life and still know how to use them, although they can't use skills and many prefer to simply grab and bite their prey. They have more health, increased defense because of the armor and deal more damage than their lesser Undead counterparts.

For full information, refer to the Bestiary page or the according section on the Undead page.

In addition to witnessing these techniques, it is necessary for Pawns to participate in killing 500 Undead Warriors either with their own Arisen or while travelling with others.

"A company of undead warriors!

Add a photo to this gallery
Retrieved from "https://dragonsdogma.fandom.com/wiki/Undead_Warrior?oldid=316614"
Community content is available under CC-BY-SA unless otherwise noted.