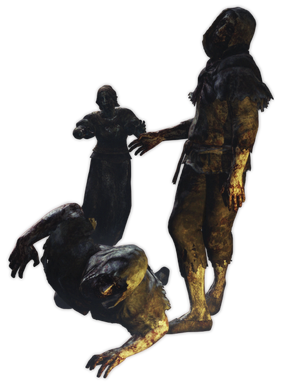 Undead is an Enemy in Dragon's Dogma.

" Undead are one of the many monsters found not only in Gransys but in every corner of the world. Most are corpses that have been revived using necromancy and can thus only move within the reaches of that magick. There are also some examples of corpses buried in land with high magick concentrations coming to life spontaneously.

Their appearance is essentially human, but the undead have no memory of their former lives and very low intelligence. They usually form hordes of five to ten individuals, but there is no single undead that could be called the leader of these groups and they do not act so human as to consciously cooperate.

Another characteristic trait of the undead is their simplicity, which makes them particularly tractable. They have destructive tendencies and any creature that is their equal or inferior will be seen as prey and hunted down—humans and animals included.

They are said to possess no memory of their former lives, but in truth they do seem to maintain some fragmentary memories. At times, undead can be found talking to walls as if they were old friends or unconsciously performing habits they held in life: unnecessary gestures such as running their hands through their hair or rubbing their noses or mouths.

A single undead is not an opponent worthy of much fear, but if they appear in a horde, you should use more caution the greater their numbers."
―Capcom official description[1]

In addition to witnessing these techniques, it is necessary for Pawns to participate in killing 500 Undead either with their own Arisen or while travelling with others.

Disturbingly, the Undead will speak of memories of their former lives, apparently unaware that they are in fact no longer living.

Retrieved from "https://dragonsdogma.fandom.com/wiki/Undead?oldid=316867"
Community content is available under CC-BY-SA unless otherwise noted.