Unarmed Combat is combat without any primary weapon equipped - it consists of punches and kicks. Pawns with no weapon will only undertake limited combat.

If the Arisen has no primary weapon equipped, they will instead resort to basic punches and a kick attack. There are no fist-based weapons in Dragon's Dogma, so the only way to use unarmed combat is by unequipping the primary weapon. The damage done by unarmed attacks relies on the base Strength of the user, and it can be assumed that kicks and punches are classified as Blunt Damage.

Whilst unarmed, the Draw and Sheathe commands are also present, and when toggled will change the stance. People will react the usual way to "drawn" fists as they would to a weapon, and the Watchfulness augment should work the same way also.

Secondary weapons such as Shields and Bows can still be used alongside regular unarmed attacks.

Pawns without weapons equipped will generally have a much reduced role in combat. They will still grapple foes if their vocation allows it, and climb enemies - whilst climbing they may use unarmed attacks; otherwise they will not attack foes, and will not come to the aid of the Arisen if possessed by a ghost.

Use of throwing items is unaffected by being unarmed. 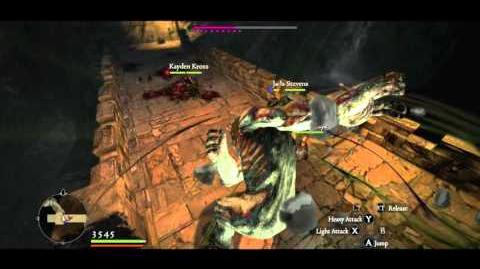