Tower of Treasons Repaid is a location in Dragon's Dogma: Dark Arisen.

Tower of Treasons Repaid is an area in the labyrinth of Bitterblack Isle. To access it from the Fortress of Remembrance, a gate has to be unlocked with the Void Key found in The Pilgrim's Gauntlet. The Tower leads to the Forsaken Cathedral.

Initially the area is inhabited by a wide variety of foes including a Gorecyclops on the first floor, three Goblin Shamans, several Skeletons, Spiders and a small flock of Succubi. Additionally a Cursed Dragon may randomly appear and can be summoned by placing Rancid Bait Meat in the area.

Post-Daimon the foes include a Metal Golem, a large flock of Succubi, a Strigoi, a troop of Skeleton Brutes and the chance to encounter Death. Or Banshees, Skeleton Brutes, Leapworms, Skeleton Sorcerers, and randomly a Cursed Dragon.

Luckily there are no Maneaters in this dungeon.

Weapon/Armor piles at the First Floor's central area may give Stone-Moss Poultice or Imperial Acid.

For chests and their contents see the map and table below 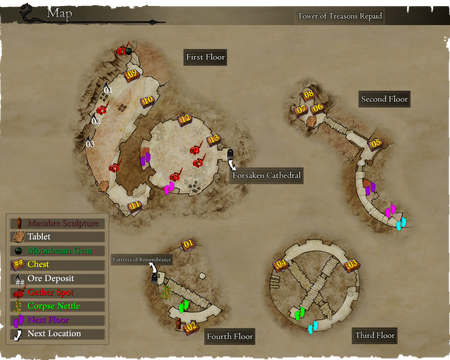 Retrieved from "https://dragonsdogma.fandom.com/wiki/Tower_of_Treasons_Repaid?oldid=308368"
Community content is available under CC-BY-SA unless otherwise noted.