The Ruins of Heavenspeak Fort

Thick as Thieves
The Secret Admirer

The Ruins of Heavenspeak Fort is a location in Dragon's Dogma.

The fort is at the high point of a pass connecting the Cursewood and beyond to the Barta Crags - there are boulder prone areas on the routes out of both sides of the pass.

The main gate is opened by a lever situated above the gate, just outside of the northwest tower.

The Westron Labrys bandits within the fort are not, by default hostile. If the party includes any un-disguised male members the bandits will become hostile only if Ophis spots a male party member.

It is usually possible for undisguised males to safely pass the fort provided Ophis is avoided.

If carried, Ophis' Badge of Amity also guarantees safe passage through the castle.

The tower (with the gate lever) northwest of the main gate :

The large central tower southeast of the main gate :

The smaller tower southwest of the main gate :

A barrel on a ledge adjacent to the smaller southwestern tower and close to the bandit's tents may contain :

"Rumours tell of their leader's hatred towards men. We might speak with her were we all women."
" 'Twould be wise to not arouse the ire of the local bandits..."
"Seems there's more than one way to deal with bandits."
"This fort was built by a duke of old. I reckon it's worth investigating."

ERROR!!! In the English language version much of the female bandit voice acting does not directly match the subtitles, thought the overall message is usually the same. 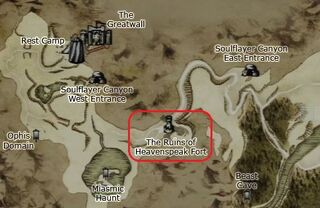 Location of The Ruins of Heavenspeak Fort (close view) 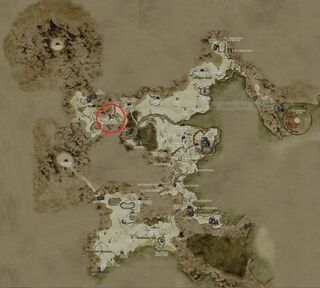 Location of The Ruins of Heavenspeak Fort (Overworld)
Add a photo to this gallery
Retrieved from "https://dragonsdogma.fandom.com/wiki/The_Ruins_of_Heavenspeak_Fort?oldid=306684"
Community content is available under CC-BY-SA unless otherwise noted.