A Troublesome Tome
No Honor Among Thieves
Smells Suspicious

The Ruins of Aernst Castle is a location in Dragon's Dogma.

This once impressive structure is located on an elevated outcropping by the coast south of the Vestad Hills. It has fallen into disrepair and is now a base for the troop called Iron Hammer Bandits.

Much of the fort's structure is decayed, with broken doors and missing roofs, though its main walls still stand. The main gate leads north across a wooden bridge to the path up towards the Manamia Trail - the Ruin also has exits to the east and west.

According to Arsmith the castle was ruined fifty years before the present Arisen's tale by the last Dragon attack: "The sad ruins of a dead castle stand to the west of the southern tip of Gransys. The work of the last dragon, that. Struck fifty years ago, and the land lias barren still..."

The bandits have made camp in the castle's outer ward, and gather there at night. They can also be found on the main and side towers standing guard.

There is a jetty on the coast which can be accessed by a steep track from the castle.

A considerable quantity of Cloudwine may be found in breakables throughout the castle, and there's a Ferrystone located on the tip of a boat at the jetty. A Wakestone Shard may be found atop the remnants of the southwestern lookout tower facing the sea. A small unassuming crate at the centre of the southeast tower, accessed by levitation from a nearby broken wall may contain Stone-Moss Poultice, Balmy Perfume or a Large Coin Pouch.

"It appears to be a bandit hideout."
"I feel half a thief myself, sauntering through this place." (a words of hypocrisy from the Pawn)
"Thieves or no, we've naught to gain from unnecessary combat."
"Mind your steps, Master. This fort holds many twists and turns." 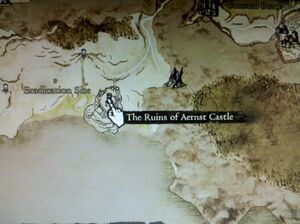 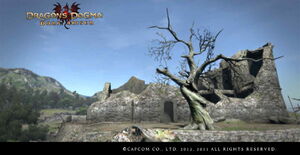 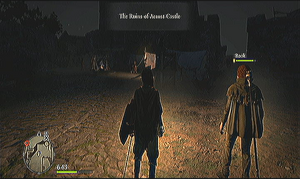 Retrieved from "https://dragonsdogma.fandom.com/wiki/The_Ruins_of_Aernst_Castle?oldid=314005"
Community content is available under CC-BY-SA unless otherwise noted.