Fortress of Remembrance
The Pilgrim's Gauntlet is a location in Dragon's Dogma: Dark Arisen.

The Pilgrim's Gauntlet is an area in the labyrinth of Bitterblack Isle. A constant fire burns amongst ruins long forgotten. The layout of the area will be familiar to locations previously explored, being similar in architecture and design to other areas such as the Garden of Ignominy.

It can be accessed through the Fortress of Remembrance.

A Maneater will hide in a chest in the entrance to the alcove that leads to the "Recollections of another Arisen" tablet.

On subsequent visits, the party may encounter Giant Geo Saurians, a family of Cyclopes (one regular, one armored, one miniature), as well as further Corrupted Pawns, and a chance to battle yet another Cursed Dragon.

Post-Daimon, either Pyre Saurians, Hellhounds, Wraiths and a Firedrake or Pyre Saurians, Banshees, two Golems, and Sirens can be encountered. Additionally, Death may randomly appear.

A Void Key for the locked gate to Tower of Treasons Repaid and two Macabre Sculptures are found here.

For chests and their contents see the map and table below 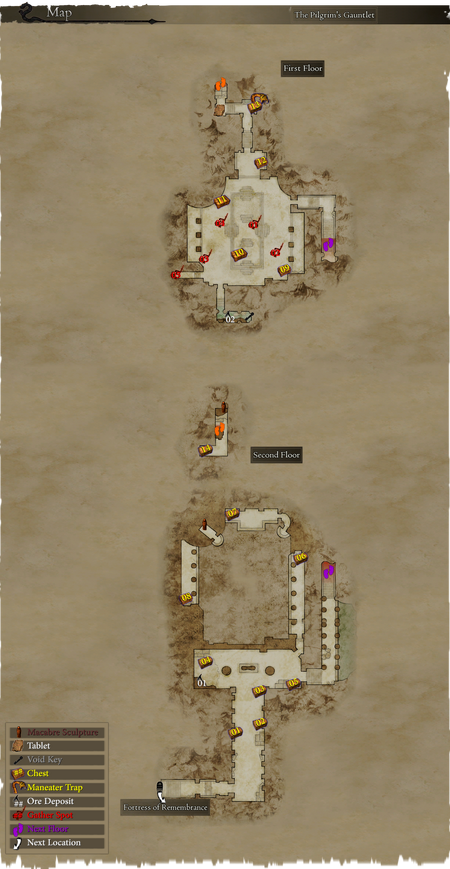 "The room is ablaze!"

Retrieved from "https://dragonsdogma.fandom.com/wiki/The_Pilgrim%27s_Gauntlet?oldid=322965"
Community content is available under CC-BY-SA unless otherwise noted.