The Mountain Waycastle is a location in Dragon's Dogma.

A place of rest on the journey between Gran Soren and South Gransys. It is one of the only two routes allowing passage from South Gransys to the city and lands around it.

"I have provided weapons to many a brave soldier. Some have brought me tales of their travels to the Mountain Waycastle where they often stop to rest on their way to the capital from the lands of the south. Though it's not usually a spot for battles, one can hear many a thrilling tale of adventure from the knights who pass through. They are brave men but not above also expressing their deep fears in this time of the dragon's return."
―Caxton[1]

The south side of the gate is manned by two soldiers, Ser Jerrome and Ser Ronell who have created a small camp with tents, a chest and a Riftstone.

To the south is the Manamia Trail and to the north is Moonsbit Pass. The waycastle gate leads to a stone bridge crossing a deep gorge through which a river flows towards the Cobal Coast - upstream westwards on the river are the Man Swallowing Falls. A raised open area to the southwest of the castle and camp is home to rabbits, and the nests of several birds. 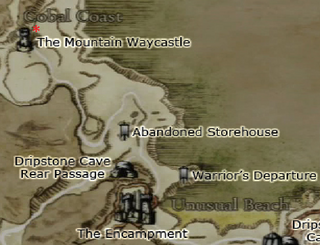 Area Map
Add a photo to this gallery

Retrieved from "https://dragonsdogma.fandom.com/wiki/The_Mountain_Waycastle?oldid=308126"
Community content is available under CC-BY-SA unless otherwise noted.