Start a Wiki
watch 01:14
What is The Great Hereafter?
Do you like this video?

The Great Hereafter is a quest available in Dragon's Dogma.

"You have become the new Seneschal, keeper of the world. The Seneschal's Chamber shall be your home for eternity. It is the fate of the Arisen to dwell within these Chambers forever and always."

You are now Seneschal of the world. Find your own way to end the endless cycle.

Sitting upon the throne will return the Arisen to Gransys, either to Cassardis or Gran Soren.

As the Seneschal, interaction within these areas is greatly limited. During these times, the Arisen will enter the towns invisibly as a ghostly figure, without their pawn.

To complete the quest, return to the Seneschal's Chamber, hold the Godsbane and use it (pierce). The Arisen drops to the ground, dead - the cycle is ended...

Fate of the Pawn (epilogue)

After using the Godsbane, the Arisen drops to the floor of the Seneschal's Chamber, dead. After a short time, a portal beneath them opens and the Arisen and pawn fall together through the sky towards Gransys.

Both fall into the ocean - the Arisen somewhere out to sea, the pawn near the shoreline of Cassardis. They wake up in the body of the former Arisen, calling out their master, then a look of confusion takes hold as they realize their body has changed.

One friend close to the Arisen appears on the beach, and together they walk away from the shoreline.

"You feel an odd pride as you plunge the Godsbane into your chest, as if claiming a great victory. .. Finally, there is the end of your tale -- one penned by your own hand, no less. As your consciousness fades into the black, you feel a peculiar sensation on your lips: you are smiling.

.. Cleansed by the surf, a body washes ashore on a deserted beach. Nameless, this soul awakens, eyes gleaming with the will to live, and for all things worth living for."

"You're... like me. Aren't you? As my grandmother gave me life, he/she gave you yours... They gave us death, and with it true life... This is the world he/she wanted for us."

"So...Is it over? I don't know what you were wrapped up in, but it must have been something grand. And the world is a different place for it...Though I'm sure we'll still manage brilliantly, you and I."

"Thank you. I'd given up hope of seeing you again. In any form! It's clear forces beyond my ken are at work here...But I'll ask no questions, not today."

"It is you...Isn't it? Of course it is. I'm sorry. You just seemed...changed. But I suppose it isn't you who's different. It's everything else, and you who changed it..."

[No special dialogue. Only body and facial expressions like an ordinary Beloved.]

Travel as the Seneschal is limited to either Cassardis or Gran Soren - attempts to leave either place through their gates return the Arisen to the Seneschal's Chamber. The Seneschal can use their weapon, even kill people and revive them with a Wakestone, as well as pick up and carry people and objects about - all other actions, save opening doors, are not possible.

In the Seneschal's world, Riftstones are no longer present, just empty space remains where they once were. Additionally, if Your House is visited, neither the Arisen's Beloved nor Selene will be found. The destruction of Gran Soren is also undone. 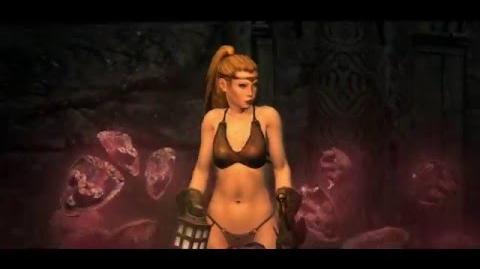 The Great Hereafter (quest walkthrough)
Add a photo to this gallery

Retrieved from "https://dragonsdogma.fandom.com/wiki/The_Great_Hereafter?oldid=306686"
Community content is available under CC-BY-SA unless otherwise noted.