The Bloodless Stockade
The Forgotten Hall is a location in Dragon's Dogma: Dark Arisen.

The Forgotten Hall is an area located in the labyrinth on Bitterblack Isle. It is accessed through Rotwood Depository and leads to The Bloodless Stockade.

Initially the area is inhabited by a Lich who summons Undead Warriors, several Spiders on the staircase, two Prisoner Gorecyclops, two Sirens, and Corrupted Pawns (on the First Floor) as well as half a dozen Leapworms. Three Garm may appear at the Second Floor entrance or in the First Floor courtyard.

Additionally Death may randomly appear at any stage.

A Macabre Sculpture and the ninth table of the "Recollections of another Arisen" are found here.

Rubicite can be mined from ore deposits.

For possible chest loot refer to map and table below 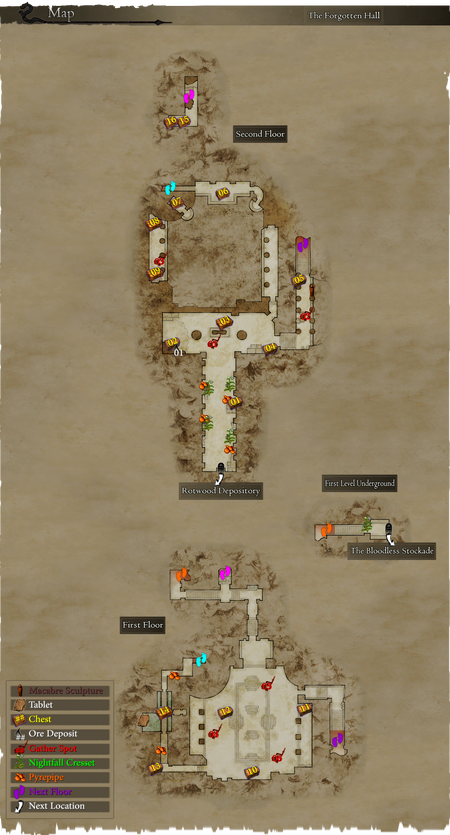 "The air is awhirl with grief and rage."

Retrieved from "https://dragonsdogma.fandom.com/wiki/The_Forgotten_Hall?oldid=323111"
Community content is available under CC-BY-SA unless otherwise noted.