Start a Wiki
watch 02:18
What is The Fallen City?
Do you like this video?

The Fallen City is a location in Dragon's Dogma: Dark Arisen.

The Fallen City is an area in Bitterblack Isle. It is entered through the Sparyard of Scant Mercy and leads to Bitterblack Sanctum.

The Fallen City contains a large number of houses with narrow alleys and easily-accessible roofs. Bodies of its past inhabitants, and possibly past Arisen and their respective Pawns, litter the streets. This underground city is located on top of a high plateau and one may fall off its edge if not careful.

There is a broken Riftstone next to the door to Bitterblack Sanctum. It can be restored for 35,000 RC.

Post-Daimon, the creatures tend to appear in two possible formations:

Two Macabre Sculptures, a single Moonbeam Gem, and a Wakestone can be found in the northeastern part of the city (see map).

Pyrepipe, Nightfall Cresset, and Lunanise grow here, and the area's ore deposits may yield either Rubicite, Diamond, or Moonstone.

Items found lying around, lost or discarded include Decaying Grimoire, Month-Dried Harspud, Sour Ambrosial Meat, Ceramic Jug, Pumpkin, Giant Rotten Fish, Moldy Carrot, and Bricks. An Animistic Robe, Thick Fur Greaves, Ring of Sable or Giant Coin Pouch may be found in the crates near the bottom of the staircase.

For possible chest loot refer to the map and table below. 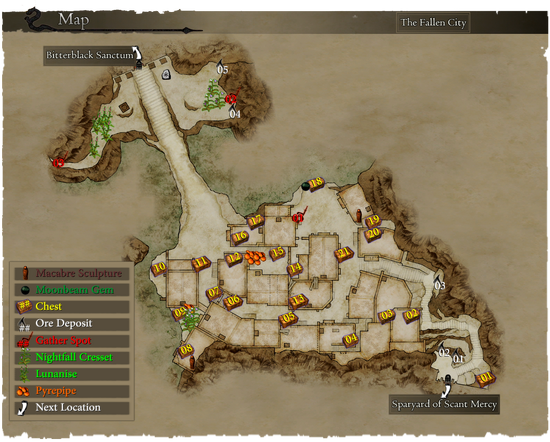 Ashe's Account at the Monument of Remembrance describes his ruined village, furthermore Barroch states that the Arisen and he both wander about the imaginary world of their "host", who is, as Olra also says, Daimon. It can be surmised that The Fallen City is indeed where Ashe grew up, as it is a portion or recreated memory of his ruined village before he was made Arisen. 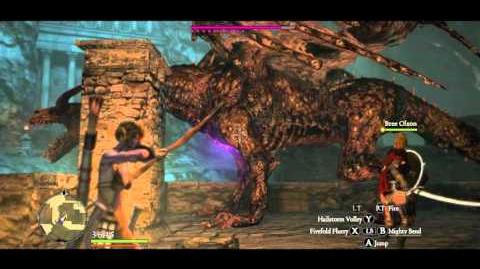 Strider vs The Fallen City (full battle). No damage.
Hard mode demonstration with no armor, buffs, curatives or Wakestones used. The Arisen wields a Rusted Bow and Framae Daggers in order to debilitate and slay all enemies on the field. A Dragon's Ire bow is used to take out the 3 Living Armor at the end. 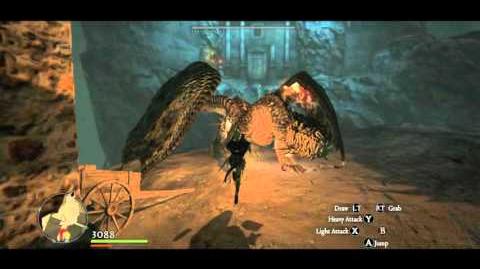 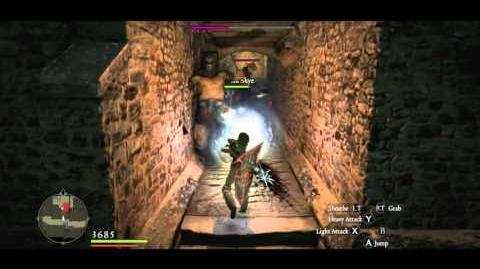 Mystic Knight vs The Fallen City (full battle). No damage.
Hard mode demonstration with no armor, buffs, curatives or Wakestones used. The Arisen wields a Magebreaker mace to freeze the Eliminators with its permanent Ice enchantment. A Rusted Staff is used to cast Ingle in order to lure the Living Armor out one at a time. 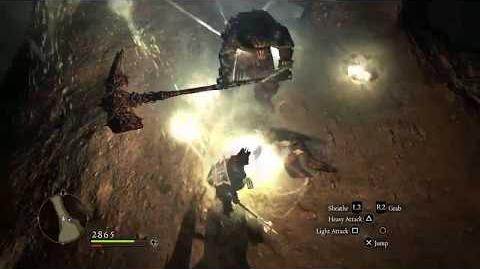