The End at the Beginning

The End at the Beginning is a quest available in Dragon's Dogma.

"In another place, in another life, another child of man blazes your path..."

"The Arisen is destined to defy the Dragon, who terrorizes and destroys the land. With the assistance of his faithful Pawns, Savan has to fight his way through the Wyrm's lair before he would face the fearsome creature."

The End at the Beginning forms the prologue to the main quest in Dragon's Dogma - in which the player takes the role of Savan, who is, together with his pawn Salde and the pawns Quince and Morganna, on their quest to face the Dragon.

The player controls Savan, an Arisen of ages past, who enters the lair of the Dragon together with his Main Pawn, Salde. A first tutorial message invites the use of a lantern, introducing the inventory mechanics. The player is also advised to browse the Pause Menu and give a try to the basic combat moves.

The Dragon shows himself, but the two Fighters have to go through the Wyrm's lair before they can face him. Dispatch a few Goblins first, before reaching a Riftstone. The Arisen can use this Riftstone and summon two additional Pawns to fight at Savan's side: Quince, the Strider, and Morganna, the Mage. Afterwards, a quick display on how to issue orders to the Arisen's Pawns is shown. 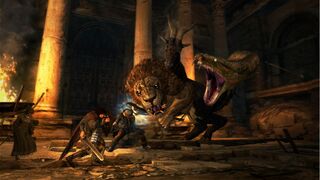 Proceeding through the dungeon, another band of Goblins and Hobgoblins will appear. Upon reaching a corridor afterward, a brief cutscene foreshadows the confrontation with a Chimera. In the next room, the Arisen is attacked by a group of Snow Harpies. After this fight, Savan will meet Ser Palotti who came to assist, together with two other knights. Their support is very short-lived, however, as a Chimera leaps out of the shadows onto one of the knights and rips him to shreds. This battle is the final confrontation of the tutorial.

Once the Chimera is successfully defeated, a cutscene will play and will conclude this prologue. The player is then given access to the Character Creation menu (See Character Editor), where they are able to create and customize their own Arisen. 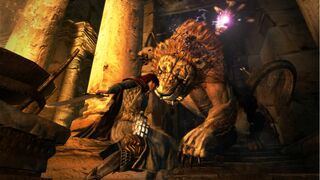 "'A vast army formed to slay a dragon, the ultimate

incarnation of evil. But against such fearsome

resistance, the army was crushed.

The people's hopes fell upon a chosen one,

and with those who followed this gifted soul...'"

Retrieved from "https://dragonsdogma.fandom.com/wiki/The_End_at_the_Beginning?oldid=306622"
Community content is available under CC-BY-SA unless otherwise noted.