Start a Wiki
watch 02:48
'Dragon's Dogma' Walkthrough: The Cypher
Do you like this video?

The Cypher is a quest available in Dragon's Dogma.

"Investigate a slate bearing a forgotten script. It may reveal aught of the dragon."

This quest is one of four that can be obtained from Ser Maximilian once the Arisen has received the Wyrm Hunt License from Ser Duncan after the completion of the quest the Lure of the Abyss.

The Cypher requires the Arisen to investigate the meaning of strange writings on an Ancient Slate, and takes them to Hillfigure Knoll, and a meeting with The Dragonforged.

The quest is obtained by speaking with Ser Maximilian in the Noble Quarter and selecting "Decipher a text" from his available quests. This quest requires the Arisen to decipher an ancient text, believed to somehow involve the Arisen and their fate.

The initial parts of the quest are optional and it is possible to go directly to Hillfigure Knoll to complete the quest. (See § Seek Further Leads).

Start by heading towards the Fields of Gran Soren in the Craftsman's Quarter. Speak with a farmer named Josias and he will state that he doesn't know anything about the writings, but thinks that a scrivener might be able to tell more.

Head towards The Black Cat, which can be found in the Venery and speak with the scrivener Mountebank. Unfortunately he will only be able to help a little, deciphering only a few words.

Afterward, find the courier Maurin who's running around the town. He sometimes makes stops at Caxton's Armory in Fountain Square. He'll state that the words seem to have something to do with Hillfigure Knoll.

Regardless on how this point is reached, Hillfigure Knoll is the final destination. To reach it be prepared to do some traveling. Hillfigure Knoll is located to the north of Gran Soren, near the Northface Forest. To get there it is best to exit Gran Soren through the northern entrance and travel to Deos Hills. Take the path leading north and over the bridge. Directly after the bridge the path splits, but take the right path called Conquest Road which goes north. Along the way will be Bandits, Goblins, Direwolves, sometimes a Cyclops and Snow Harpies.

Travel up the hill and head towards the dolmen to left of the hill. As the rocks are approached the Fool and the Dragonforged will meet with the Arisen, and the quest will continue from inside Hillfigure Knoll. Speak with The Dragonforged and he will explain the Ancient Slate's meaning.

After speaking with the Dragonforged, the Arisen is free to explore the caverns. There is a Bronze Idol next to his throne and a Recluse's Robe in the Armor/Weapons pile close to the entrance.  Head back to Gran Soren and report the findings to Ser Maximilian.

After speaking with Ser Maximilian the quest is completed. 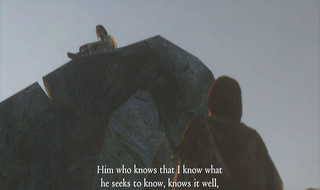 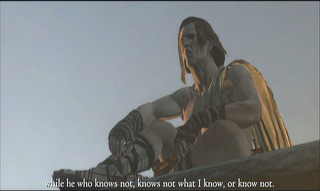 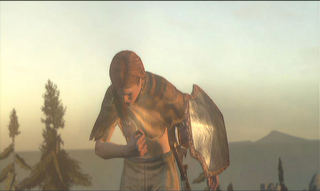 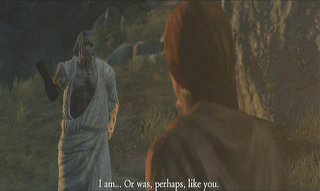 Add a photo to this gallery
Retrieved from "https://dragonsdogma.fandom.com/wiki/The_Cypher?oldid=304135"
Community content is available under CC-BY-SA unless otherwise noted.