Start a Wiki
watch 01:28
Game Recap: Dragon's Dogma: The Conspirators
Do you like this video?

After meeting the Duke

The Conspirators is a quest available in Dragon's Dogma.

"Return the Confidential Letter to Fedel."

Fedel is greatly concerned that a Confidential Letter may have fallen into the wrong hands. Retrieve the missing letter.

This quest becomes available after meeting the Duke in the quest Come to Court.

Speak to Fedel within the Duke's Demesne in Gran Soren to obtain this quest. Fedel seeks a meeting after nightfall to explain the sensitivity concerning the loss of the letter.

Sleep at the inn until night and head to the Duke's Demesne in the Noble Quarter. Avoid the night guards and wait for Fedel by the gazebo in the eastern garden area. There, Fedel will explain his quest and direct the Arisen to a location in the Cursewood where the lost confidential report was stolen by flying monsters.

At the crossroads in the Cursewood, the Arisen will find the remains of Fedel's cart and a Gargoyle will be seen flying away to the northwest towards Soulflayer Canyon.

Now travel to Soulflayer Canyon to retrieve the letter. Reaching the correct ledge in the canyon can be a little tricky, but a pawn with full knowledge of this quest and Soulflayer Canyon will lead the Arisen directly to it.

From the west entrance, take a left at the passage fork. After slaying the Cyclops on the bridge, continue straight until reaching a treasure chest on the left side and a steep downward grade on the right side. Slide down the left side of this grade to the landing with two Godsthrone Blossoms (sliding down the right side leads to the main entrance). Slide down two more times toward the left to another area that may contain a snake and two spiders.

Collect some gold pouches, a Panacea and two Sconces on the left before encountering yet another downward slide. Slide down the right side of this downward grade to a landing with more gold pouches, the fleeing Gargoyle, quest items scattered on the ground, and a chest containing a Steel Beak.

Slay the Gargoyle and collect the Confidential Letter as well as the Parcels lying scattered on the ground and return to Gran Soren. 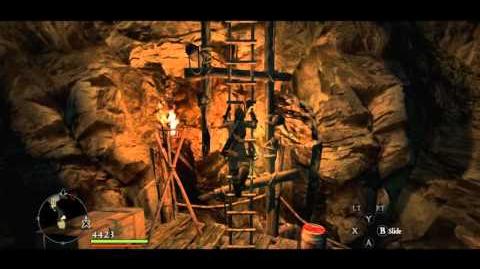 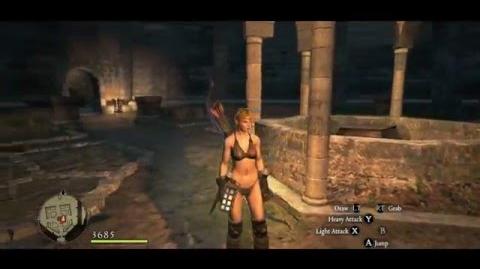 If entering from the east, just traverse the tunnels of the canyon until the fork after the west entrance is reached, and continue as above.

Back in the capital, one may want to make forgeries of the Confidential Letter at the Black Cat afore handing it in.

Upon entering the Duke's Demesne, the Arisen will be accosted by Ser Gabrian who was lurking behind a corner to the right of the entrance. This is the only opportunity to speak to Ser Gabrian. Either give him a copy or refuse. If refused, the letter must then be taken to Fedel.

The quest ends when the Arisen brings back the Confidential Letter to Fedel, or Ser Gabrian.

By forging the letter, the Arisen can obtain the gold and experience reward for the quest twice: first when giving one to Ser Gabrian near the entrance, and the second to Fedel.  To collect both rewards, Ser Gabrian must be given his copy first, then Fedel the second one.

The storyline will not be altered either way the Arisen handles this quest, though Fedel is correct about signs of a rebellion. It seems the letter refers to the soldiers who later rebel at Windbluff Tower. Ser Gabrian is almost certainly trying to intercept the letter and thus is in league with the treachery at Windbluff Tower.

The sedition reaches its peak during the revolt in the later quest Pride Before a Fall.

Once Ser Gabrian is given the letter (or a forged copy of it), the quest will be marked as "Completed". However, the Arisen can still deliver a copy of the letter to Fedel upstairs in the castle.

"Ah, you've come. You must forgive me the secrecy. The matter demands it, I assure you. I dare not to speak it aloud, so pray, listen close.Truth be told, I have long traveled the land in secret, keeping watch over the duke's army. Now I fear my investigation has borne fruit... One company has amassed supplies far beyond their need. Their regimen of training, too, defies comparison. His Grace must know of this, thought I, and so drafted a letter to send the moment I found a courier I could trust."

"But fate is cruel, ser, and the pack I'd placed the letter was snatched by monsters out on the roads. If someone should find that missive, and its contents become known to the public, morale will crumble. What's more, a secret serves use only so long as it stays hidden. Their treason will be more easily foiled if they do not expect the duke to know of it. The letter must be found. Surely you understand, ser? I would ask you to find it and retrieve it here to me."

"Naturally, His Grace cannot openly compensate you for this task, but I shall gladly pay you of my own pockets should you succeed. Maker speed your steps, ser."

"I was travelling the roads when I was attacked. Came from the air, swooping down long enough to snatch up my pack. Like as not it carried it back to their nest, though where that may be, I know not... The mountains near the Greatwall are nest to many a flying creature, though. Perhaps there is the best place to start."

"That seal... You've found the letter! And the seal is yet unbroken. Good, its contents remain a secret. I shall give it to His Grace myself at the earliest chance. You are a wonder, ser. I shall see that you are properly rewarded for this boon."

"Still dallying, then? Forgotten outright? Well, I was a fool to have asked you in the first place..." (after quest expired)

"A moment, ser. I am named Gabrian. I serve under Ser Daerio, captain at the Stone of the North. I see the captain was correct in surmising you would possess that letter... 'Tis a missive chamberlain Fedel asked you to retrieve... Am I correct? Pray, do not lend credence to that fox's lies. He is a man drunk on ambition. He plans to win the duke's trust by sreading lies of sedition, happily shedding the blood of faithful men in the process. But even that is but a preamble. Giving him cause to meet with the duke in private is as good as lending him your dagger to plunge into His Grace's breast. Ser Daerio is determined to see Fedel's traitorous designs thwarted. Allow me to bring the letter to Ser Daerio. As none know of it, you need fear no ill consequence. All I have heard of you suggests a person of keen judgement. Pray, give me the letter, ser."

"The castle courtyard, after nightfall..."

"You've not forgotten, have you? The castle courtyard, by night..."

"Let us make for the hills near the Greatwall."

"Fedel's pack was stolen by the likes of those gargoyles, I'd warrant."

"Here! 'Tis the letter! Let us hasten it back to Fedel's hands."

"We carry precious freight, Arisen. Best we were especially cautious."

"I see little evidence of the dark rumblings Fedel spoke of..."

"Talk of this ilk oft ends in difficult choices..."

"Who truly stands to gain by this letter?"

Retrieved from "https://dragonsdogma.fandom.com/wiki/The_Conspirators?oldid=313608"
Community content is available under CC-BY-SA unless otherwise noted.