Start a Wiki
watch 02:16
'Dragon's Dogma' Lore: The Bluemoon Tower
Do you like this video?

The Bluemoon Tower is a location in Dragon's Dogma.

A mysterious ruined tower far to the north of Gran Soren. It is the nest of a Griffin, and later the home of an outlaw sorcerer, Salomet.

"Tis written that this tower was built long, long ago, at a lord's behest. No accounts remain of why, however. None know what purpose it served. Some say it was to ward against the wyrm; others, an altar to the old gods." - Pawn

The Bluemoon Tower is located in a distant eastern part of Gransys, far north of the capital. It is visible from most eastern coastal areas.

In order to reach the Bluemoon Tower from Gran Soren, travel north along Conquest Road beyond the Windbluff Tower, passing east of Hillfigure Knoll. Take the right of two choices at a fork in the road (the other leads to the Blighted Manse).

Pass through Windworn Valley, where a heavy wind will impede the Arisen's progress. Here a second left fork leads north to a Travelers' Rest encampment, whilst the route to the tower is along the rightmost fork. Then traverse the Pastona Cavern and Smugglers' Pass to reach Cutlass Cape and the tower.

Random items found scattered around the tower including Light-Cure, Interventive, Dose of Courage, Panacea, and various Coin Pouches. There is an Ore deposit on a lower walkway below the outer ruins which yields rare ores including Fuligin Ore. Furthermore, the only Ore Deposits in Gransys where Alluvial Yore-Ore can be mined are found here - care should be taken when using indirect mining methods as ore released here has a tendency to drop into the water below.

On the upper tower platform will be found a Portcrystal between the two chests. There are also Coin Pouches here, totalling 46,100 Gold, and some Bladeleaves.

There are five Seeker's Tokens to be found here, two are on ledges near the first Griffin statue on the left, another at the corner edge of the circular walkway round the main tower (after the locked door), and a fourth is found atop a high column, far above the first two.

There's also a Ferrystone lying on ground, on edge of the rooftop, near the place where Salomet falls during The Wyrmking's Ring.

† For ways to reach the chest see Chimera Strategy Vol. 2 § Walkthrough
‡ Aerial chest - above the path atop columns

"Mankind does love to build towers.  Tis like they pursue their Maker's own vantage..."
"Looks more a ritual hall than a rooftop, this."
"The floor is crumbled... 'Tis treacherous going."

"Harpy Ride Pt.1" fly a harpy to an upper section of wall, opposite the circular structure of the upper tower.

"Harpy Ride Pt.2" fly a harpy a second time across to the circular structure - beware Skeleton Mage and Snow Harpy will be waiting.

Using Sunflare to glitch through and over the locked door

Using Sunflare to glitch back through and over the locked door 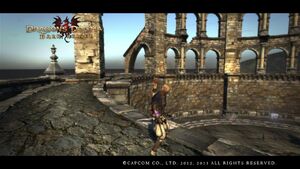 Upper arcade, above the main area, Bluemoon tower - note that parts of the upper arcade structure are not displaying correctly.
Add a photo to this gallery

The Bluemoon Tower from afar
Add a photo to this gallery
Retrieved from "https://dragonsdogma.fandom.com/wiki/The_Bluemoon_Tower?oldid=310552"
Community content is available under CC-BY-SA unless otherwise noted.