Start a Wiki
watch 01:54
'Dragon's Dogma' Lore: The Bloodless Stockade
Do you like this video?

The Bloodless Stockade is a location in Dragon's Dogma: Dark Arisen.

The Bloodless Stockade is an area in the labyrinth of Bitterblack Isle. It is accessed through The Forgotten Hall and has entrances to Sparyard of Scant Mercy and the Arisen's Refuge.

Much of the lower area consists of water filled sewers. Bring a lantern or spend 300 Rift Crystals each to light the Beacons as the underground area is pitch dark.

Initially Death will be encountered in this area, often in the sewers. An Eliminator can be found near the Arisen's Refuge. Other foes include Spiders, Leapworms, Poisoned Undead, Corrupted Pawns, Specters, Wight, Cyclops, Wraiths, and Phantoms.

Post-Daimon the area becomes more dangerous due to the additional presence of either :

Both also include large numbers of Leapworms.

A Macabre Sculpture can be found here on the second floor, and a Moonbeam Gem in the underground sewer level. Pyrepipe and Nightfall Cresset grow here. Additional gatherable items include a Wakestone or Wakestone Shard, Jewel of Summoning, Monk's Periapt, Bitterblack Novelty Lv.1, Drop of Deliverance and various amounts of Rift Crystals. 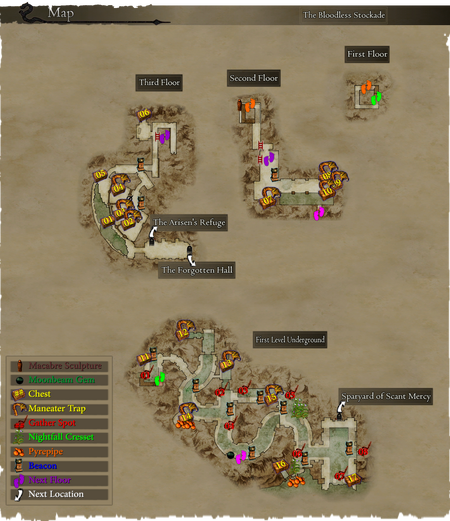 "We'll not fear for ambush if we dispel the dark with this."

"A bit more light can only help us in our explorations."

"Strain your eyes against the dark. We may not be alone."

"A lantern serves well in the dark, but it cannot match a beacon fire's light."

Retrieved from "https://dragonsdogma.fandom.com/wiki/The_Bloodless_Stockade?oldid=317525"
Community content is available under CC-BY-SA unless otherwise noted.