The Blighted Manse is a location in Dragon's Dogma.

Once a popular location for nobility, this castle has fallen into disuse. It remains closely guarded, however - the front entrance to the Manse is guarded by Ser Whitby, Ser Ethen, and Ser Josiah, whilst the rear entrance is locked from outside.

The Manse consists of two main areas, the castle itself, and the underground sewers leading to the rear entrance. A locked door between the two areas requires the Manse Key.

One cannot enter the Manse front entrance without a Set of Royal Guard Armor - usually obtained as part of the quest Duchess In Distress. The rear entrance is closed until after the same quest.

During Duchess In Distress, the Manse itself is patrolled by Soldiers, whilst the sewers are home to Bandits.

The patrolling guards are Ser Ross, Ser Tyrone, Ser Dorgann, Ser Kain, and Ser Curtis. Each wears Gran Soren armor and shield and carries a broadsword. If the alarm is raised, further soldiers trained in Mystic Knight skills will arrive - the soldiers are equipped with Knight's Honor and Steel Beak or a form of Ironclad Staff.

After Duchess In Distress, the Manse becomes infested with Specters and Goblins, and Bandits still lurk in the sewers; prior to it the Manse is empty.

The portion of the Manse above ground contains a lot of kindling and Wood Bundles plus other minor items and potions around the walls and in crates. An upper floor guard room contains substantial Gold, chests, an Airtight Flask, and other items.

At night the Wood Bundles here may contain Jewel of Darkness, Jewel of Time, Large, or Giant Coin Pouches - by day they only contain Kindling.

In the sewers is plenty of Gold, and fabrics like Argence and Silk are fairly common. The mushroom Droughtshroom is unique here. Ore deposits are nearly absent, with only two mining spots throughout.

"Time was, the duke would hold the most fantastic balls at the manse... But that was back when His Grace was...of a healthier temperament."
"There was even a time, you know, I spent my nights at the manse, stealing kisses from a nobleman's daughter. There's a secret corridor to the place, you see. Just the thing for late-night mischief."

"My days and nights are spent watching over the Blighted Manse. Built by the previous duke to entertain his court of visiting dignitaries, the Manse was his most prized fortress. As a guard, this job is a quiet one. We are surrounded by woodland and harsh mountains to protect from danger, and since it stays unseasonably cool during the summers, we used to play host to the vacations of the Royal Family. However, now, due to the dark times, The Manse is a shadow of its former self. I'm not sure why it requires such security without visitors, perhaps some family secrets remain inside." (The Blighted Manse, Capcom via youtube) 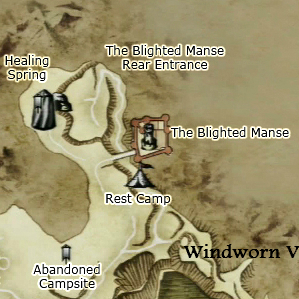 Add a photo to this gallery
Retrieved from "https://dragonsdogma.fandom.com/wiki/The_Blighted_Manse?oldid=310183"
Community content is available under CC-BY-SA unless otherwise noted.