watch 01:56
What is The Black Cat?
Do you like this video?
Play Sound

Mountebank
The Black Cat is a location in Dragon's Dogma.

"Hmm... This shop bears a rather unwholesome look to it..." Pawn

The Black Cat is run by Mountebank and deals in rare goods that cannot be found in normal shops. Mountebank will also offer his opinion on the state of the Dukedom and Duke from time to time.

The shop itself is found in a side passage deep within the Venery in Gran Soren. After the cataclysm of The Final Battle Mountebank relocates, offering his services from behind the remains of Arsmith's Alehouse.

Additionally he sells copies of some rare weapons including Golden Weapons, though such items need to have been obtained through their respective quests first before their copies become available. Special suits of armor and clothing (generally copies of DLC items) can also be purchased from Mountebank.

The Black Cat provides a counterfeiting service producing forgeries of most items for a fee. This is most useful to duplicate materials needed to enhance armor and weapons. Mundane items and scripts can be perfectly forged, whilst items with magickal powers cannot, or produce replicas similar only in appearance, not function. For details, see: Forgery.

Finally the shop is the place to go when an important Quest Item was lost in some way - most misplaced quest items will turn up here in one form or another.

"Precious things that have gone lost or missing have a way of turning up here..."

Lost quest items will often turn up at The Black Cat. Players can purchase Special items that have been accidentally sold, discarded, or gifted to pawns.

There are two special cases:

The sign above The Black Cat reads "Counterfeit Shop" in the Gransys Alphabet.

There is also largish poster within the Black Cat that appears to have a text written in the Gransys Alphabet. The first line is "capcom", and the second begins "dragonsdogma" - the rest of the text is in romanized Japanese.

The text is romanized Japanese (Wikipedia:Romanji) - it reads : 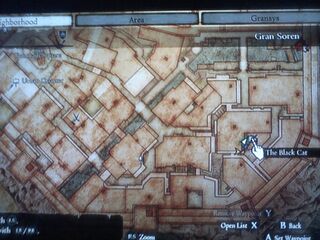 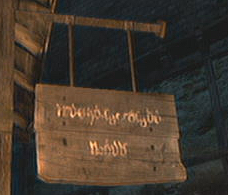 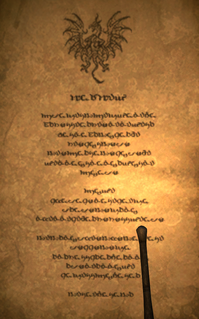 Poster in the Shop
Add a photo to this gallery

Retrieved from "https://dragonsdogma.fandom.com/wiki/The_Black_Cat?oldid=323777"
Community content is available under CC-BY-SA unless otherwise noted.