The Black Abbey is a location in Dragon's Dogma: Dark Arisen.

The Black Abbey is a location in the labyrinth of Bitterblack Isle. It can be accessed from the Fortress of Remembrance, Second Level Underground. It shares its arena style with the Rotunda of Dread and has the same function as an arena for Arisen and Pawns to fight different groups of foes. The Black Abbey may be immediately re-entered repeatedly, a different combination of enemies will spawn.

One Macabre Sculpture can be found here.

For chest locations and their contents see the map and table below. 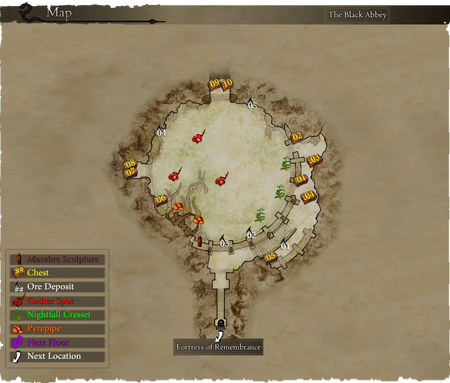 "We know not what's inside...best be prepared for anything."

" 'Tis not defeat to flee from battle, Master. 'Tis survival." 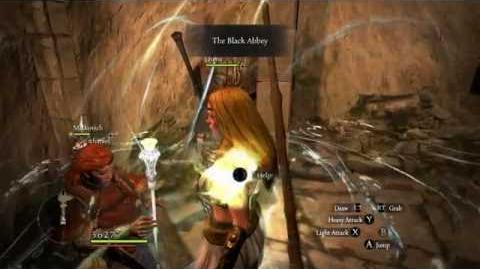 Pre-Daimon - Black Abbey - Rusted Warhammer
Add a photo to this gallery
Retrieved from "https://dragonsdogma.fandom.com/wiki/The_Black_Abbey?oldid=315826"
Community content is available under CC-BY-SA unless otherwise noted.