The Arisen's Refuge is a location in Dragon's Dogma: Dark Arisen.

The Arisen's Refuge rests itself inside near the main entrance of The Bloodless Stockade.

The shortest route to the Arisen's Refuge is through the Corridor of the Hallowed to the Rotwood Depository, The Forgotten Hall and to The Bloodless Stockade.

Barroch and some Giant Rats can be found here. The rats are docile and will not attack you. There are also a Resting Bench, a Request Board and a broken Riftstone that may be restored for 25,000 RC here.

Crimplecap and Corpse Nettle grow here. Additionally, one of each of the special items Moonbeam Gem and Macabre Sculpture can be found. 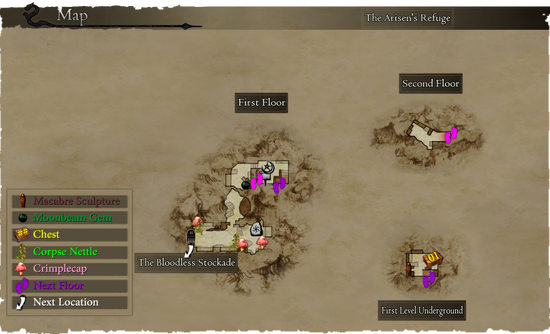 "The scent of beasts is thin here. We should be comparatively safe."

Retrieved from "https://dragonsdogma.fandom.com/wiki/The_Arisen%27s_Refuge?oldid=314379"
Community content is available under CC-BY-SA unless otherwise noted.