Of Merchants and Monsters
The Ancient Quarry is a location in Dragon's Dogma.

The Ancient Quarry is located west of Gran Soren, connecting Southern and Central Gransys. The eastern entrance is from the Estan Plains (near the abandoned Miner's Hut), and the western exit is approximately halfway between The Shadow Fort and the Rest Camp in the Devilfire Grove region.

The quarry consists of a main tunnel running from exit to exit via a central area where quarrying has taken place, and there are a number of side and minor tunnels. An Abandoned Mine is located off the main route through the quarry, consisting of a forge and human made tunnels.

On first stepping into this area, it will be filled with Bandits and monsters, and the grills of its main gates will be lowered; the merchant Alon will be loitering directly outside the eastern entrance to this area. Eliminating the monsters, and opening the gates for Alon are part of the quest Of Merchants and Monsters.

Once the quarry has been cleared and the quest finished, The Ancient Quarry will become a safe zone, allowing the Arisen to run through without fear of monsters or loss of stamina. Alon will then move to the Abandoned Mine, and set up a shop (Alon's Shop) that supplies some useful warrior and fighter equipment.

The quarry serves as a useful shortcut from Gran Soren to The Shadow Fort, more so once free of monsters. Further, it can be used to access the northern section of Gransys before completion of Off With Its Head.

Before completing Of Merchants and Monsters, the quarry contains half a dozen Bandits near the Abandoned Mine, whilst the galleries of the mine contain several Undead and Undead Warriors as well as Giant Bats. Side passages near the western exit contain several Goblins. The most dangerous creatures in the mine are three Ogres who have made their homes in the passages.

Other minor creatures include Snakes, Rats, and Spiders. If Of Merchants and Monsters is not completed, the Ogres do not return, even after many moons, but the lesser creatures will return.

During the quest The Wyrmking's Ring, Salomet and his Bandit allies may also be encountered in the mine.

After completing Of Merchants and Monsters, the mine becomes populated with people: all have escort quests that will be posted on the notice board at the Union Inn in Gran Soren. The guards want to go to Bloodwater Beach, and they offer some decent rewards. The miners want to visit the Shadow Fort but they offer only mediocre rewards.

As befits a mine the quarry is a good source of various ores, both common and rare, with Gold, Silver, and Unremarkable Ores being common. Firefly Stone becomes more common towards and outside the southern exit, which has several ore deposits on either side of the entrance. Overall, a single trip to the mine can yield around 50,000 Gold worth of minerals, with each deposit yielding five or six ores. The deposits can be divided into two kinds: 'local', notable for containing Ancient Ore, Burst-Rock, Unremarkable Ore; and Gold Ore; and 'southron', containing Firefly Stone and Southron Iron.

The mine is also a good place to collect. As well as some Skulls, there are large amounts of Tuft of Hair which is found in scatter piles near to where the ogres were living, which are likely to have been their sleeping nests. The plants White Sage, Avernal Mushrooms and Shadowcap are common here.

A small deposit of rarish foods has been made in the main area, possibly as an offering to placate the nearest Ogre.  Here can be found a Sour Ambrosial Meat, Sour Beast-Steaks, Salubrious Brew, and several Festival Pies behind destructible crates, near the chest containing the Final Journal Entry.

Additionally the mine is quite rich in common items scattered about, such as Rotten Beast-Steaks, Rotten Scrag of Beast, Harspud Milk, Harspud Juice, Apples, Sour Scrag of Beast, and Cloudwine. Small or single quantities of throwblasts, Curious Wine and Sobering Wine may be also be found. 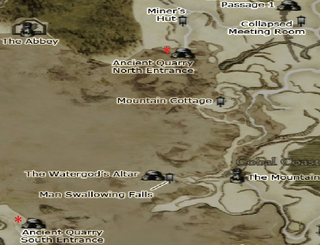 Area Map
Add a photo to this gallery
Retrieved from "https://dragonsdogma.fandom.com/wiki/The_Ancient_Quarry?oldid=318395"
Community content is available under CC-BY-SA unless otherwise noted.