Talent in Bloom
A Parting Gift
Bury the Dead

The Abbey is a location in Dragon's Dogma.

The Abbey is located in the Wilted Forest, just east of Prayer Falls and northwest of The Ancient Quarry's North Entrance. There's a Riftstone next to The Abbey's entrance.

The Abbey's grounds are surrounded by a wall, which encloses the Abbey itself, the graveyard, and a small outbuilding.

The Abbey is maintained by nuns, members of The Faith, led by Clarus.

"As one of the eldest nuns who currently resides at the Abbey, I have devoted my life to maintaining the graves of the deceased. Some may see this task as thankless, but it has given my life profound meaning. When not tending to the graves we most often pass our time with study, prayer, and reflection. Occasionally one of the local villagers will abandon a child on our doorstep. These children are taken into the Abbey, cared for, and eventually trained in our ways. Once they've reached the proper age, they join us in our work; fostering youth and honoring death."
―Clarus.[1]

The nuns of the Abbey are sisters Anri, Charline, Ilona, and Janne. They are led by Mother Clarus.

Both Mason and Quina, associates of the Faith, move to the Abbey later in the story. The travelling salesman Alon can be found here very early on. If The Ancient Quarry has not been cleared of monsters by the Post-Game, Alon will return to the Abbey and continue to trade from there.

During the daytime, Deer and Crows inhabit the area and the nuns can be seen praying, gathering items or bringing a bucket of water from the nearby Prayer Falls. They maintain the graves and look after orphaned children.[2]

At night, Undead and Stout Undead rise from the graveyard and the ground around the Abbey. Additionally, two Ogres appear in the area between the Abbey and the Prayer Falls to the northwest.

Additionally there are several escort quests to the Prayer Falls, or quests requiring the slaying of creatures that inhabit the nearby woods at night. 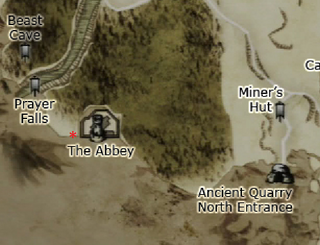 Area Map
Add a photo to this gallery

Retrieved from "https://dragonsdogma.fandom.com/wiki/The_Abbey?oldid=307610"
Community content is available under CC-BY-SA unless otherwise noted.