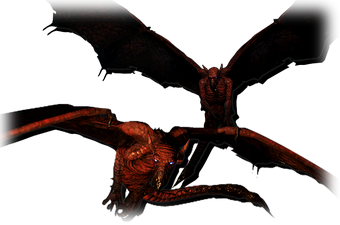 Strigoi is an Enemy in Dragon's Dogma: Dark Arisen.

These flying beasts are similar in appearance and attacks to that of a Gargoyle, except that they are larger and have red skin. They are aggressive flyers, both lunging and grabbing a person for a stinger attack from the end of its tail to suck blood of its victim.  Draining a victim makes Strigoi stronger; success is indicated by a glowing red drop on its tail.

In addition to witnessing these techniques, it is necessary for Pawns to participate in killing 100 Strigoi either with their own Arisen or while travelling with others.

"Be vigilant of those with red tails!"
"Watch they do not suck your lifeblood!"
"They grow stronger by drinking blood!"
"Strigoi that have drunk blood are said to yield a rare material!"

With little or not bestiary knowledge 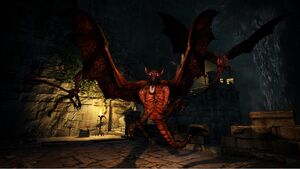 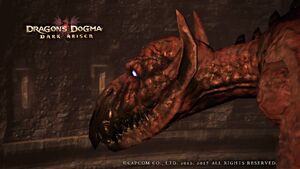 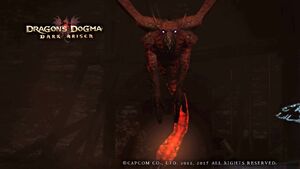 The tail of a strigoi glowing red 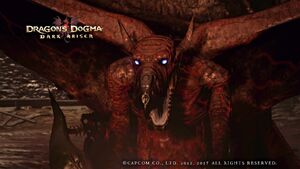 Retrieved from "https://dragonsdogma.fandom.com/wiki/Strigoi?oldid=305620"
Community content is available under CC-BY-SA unless otherwise noted.