watch 01:31
'Dragon's Dogma' Lore: Strider
Do you like this video?
Play Sound 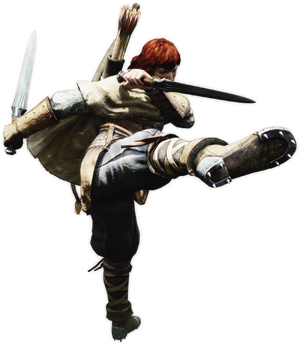 Strider is a Basic Vocation in Dragon's Dogma.

"This nimble warrior can both mount and attack foes, and use a bow to strike from afar."

Striders are a high dexterity vocation focused on swift and powerful melee strikes, along with close range arrow attacks. Their primary Weapons are a pair of Daggers, supported by a Shortbow. For armor Striders generally wear Light Armor Sets, or similar non-set components - their armor requires a trade off between defense and mobility - custom arm armor leaves one hand unrestricted for easy use of the bow.

Striders are uniquely fast climbers and are very well suited to attacking giant creatures directly. When climbing their stamina use is one third less of all other vocations, and they gain a damage boost when climbing certain giant foes. They can also hold their own on the front lines, relying on fast movement and dodges to evade enemy attacks. Their shortbows are best suited to arrow strikes at short distances, and lose power rapidly at distance.

Striders have balanced growth as they gain experience, with stamina development being notably high - suited for their energy sapping quick attacks. They lack magick and all their attacks are based around physical strength.

Additionally they have a variety of skills to trap, stun, and trick foes, and are the only vocation than can steal from other creatures.

Skills in bold are unique to the Strider.
Skills in italics can only be obtained via Skill Rings and Bands found in Dark Arisen.

The Equipment of the Strider in the Change Vocation Menu is: 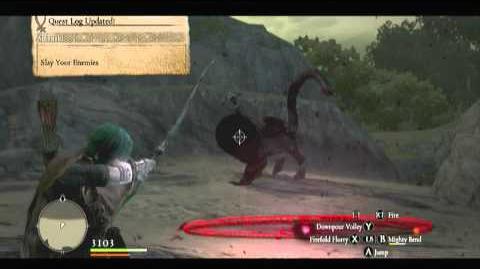 Retrieved from "https://dragonsdogma.fandom.com/wiki/Strider?oldid=325064"
Community content is available under CC-BY-SA unless otherwise noted.