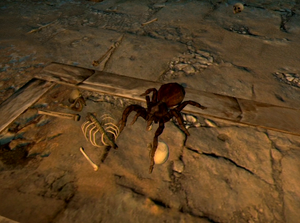 Spider is an enemy in Dragon's Dogma.

Spiders generally pose little threat to the Arisen as they are slow-moving and easily defeated with a light attack.

However, a Spider's bite can inflict poison, and they spit a web that may inflict Torpor.

As Fauna Spiders take 2.5x more damage than might be expected.

Add a photo to this gallery
Retrieved from "https://dragonsdogma.fandom.com/wiki/Spider?oldid=316560"
Community content is available under CC-BY-SA unless otherwise noted.