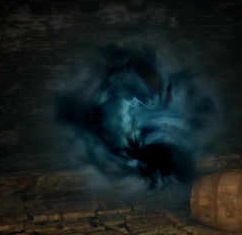 Specter is a ghostly enemy in Dragon's Dogma.

Specters are dangerous dark cyan colored Ghosts feared by all Pawns for their deadly possession attack. They have relatively high health and strong magick resistance, but they are still vulnerable to Holy magick. They are invulnerable to physical attacks, except when they're clinging to a target.

Unlike other ghosts, Spectres target only pawns, and will not possess the Arisen.

For full information, refer to the Bestiary page or the according section on the Phantom page.

The scroll Ghost Tactics Vol. 1 will grant knowledge for this enemy.

In addition to witnessing these techniques, it is necessary for Pawns to participate in killing 50 Specters either with their own Arisen or while travelling with others.

"A plague of Specters!"
"Give a call if you're possessed!"
"All consciousness ends once it takes hold."
" 'Tis nemesis to all pawns!"
"Captured pawns lose themselves!"
"Don't allow it to possess you!"
"If it takes hold of a pawn, 'tis death!"
"'Tis a soul most evil floats there."

Retrieved from "https://dragonsdogma.fandom.com/wiki/Specter?oldid=316595"
Community content is available under CC-BY-SA unless otherwise noted.