Sofiah is an NPC in Dragon's Dogma.

Sofiah is a former Arisen who was the master of the pawn Selene. She appears in ghostly form to the current Arisen during Witch Hunt.

A simple tombstone at Guardian's Grave in the depths of the Witchwood is her grave. In the aftermath of the quest Witchwood she speaks to the Arisen concerning Selene, Arisens, and Pawns; and reveals how over time her pawn Selene came to grow more and more like herself, a process she calls the "Bestowal of Spirit". After explaining this, Selene's pawn print disappears.

"...For you see I myself was once Arisen. And this girl Selene...was my pawn. The soul of an Arisen can but affect their follower. Given time, the pawn will assume the Arisen's very form....But see well Selene. See how she resembles me. I pray she can soon live her life as a human true. Age and experience separate us Arisen, but i know you ken my words."

"The witch of the woods was once friend to our village."
"But with the Faith's arrival she fled here for being branded heretic"
"It's been an age since the witch last visited our village... In truth, I can't be certain she lives here still." 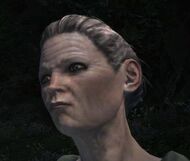 Close up of Sofiah
Retrieved from "https://dragonsdogma.fandom.com/wiki/Sofiah?oldid=317345"
Community content is available under CC-BY-SA unless otherwise noted.