For sleep at Inns and camps, see Sleeping.

Sleep is a debilitation in Dragon's Dogma that renders the afflicted immobile and vulnerable.

Sleep can be inflicted by a number of creatures, notably by the song of the Harpy and by the goat's head of a Chimera. On Bitterblack Isle, Death will attack the party by casting a sleep spell in a large area of effect with his lantern, then following it up with his fatal Scythe attack.

Arisen, Pawns and other humans may inflict sleep using Sleeper Arrow, with the spell Sopor, or the magick item Jewel of Sleep. Select Herb Ale can be used to self-inflict sleep on the entire party.

Sleep is a temporary status ailment and lasts only 20 seconds - being hit or assisted by a party member will wake the victim up. Cured by Bringbout, Light-Cure, Lunanise, Panacea, Peppermint Seed, the spell High Halidom and is also prevented or cured by any spell or item that grants Impervious.

While asleep, the Arisen will lose half as much again (+50%) health from the next blow they receive.

Creatures can take greatly increased damage - often four and a half times as much (4.5x).

The augment Resistance gives good protection against sleep from both spells and creature songs. 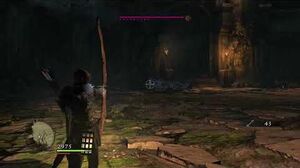 The Reaper of Dreams
An Elder Ogre is inflicted with Sleep by using a Sleeper Arrow with the Corkscrew Arrow skill to then be killed in one shot with Reaper's Arrow using a goldforged Rusted Longbow.
Retrieved from "https://dragonsdogma.fandom.com/wiki/Sleep?oldid=324726"
Community content is available under CC-BY-SA unless otherwise noted.