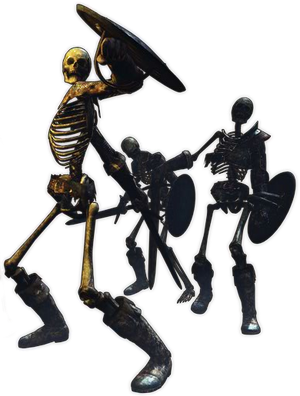 Skeleton is an Enemy in Dragon's Dogma.

Skeletons are reanimated bones of former soldiers - their flesh and clothes have long since rotted away leaving only bone and metal to do hostile intent to any that pass by.

"These moving human remains which have been given false life by some evil power are simply known as skeletons. Since they are in truth the remains of former humans, most are between five and six feet in height.

Able only to do the bidding of the one who summoned them to life, skeletons clearly have no awareness of self. Even if they appear in numbers, they have no sense of cooperation and with no individual to take control of the group, their behavior is erratic and unfocused.

Yet they do not feel fear, since they have lost the ability to feel any emotion, and so they will not cease fighting until their bodies have been effectively destroyed. Since their bodies are those of the dead, they cannot feel pain and will come at you without pause regardless of what attacks you throw at them. This makes them undoubtedly formidable enemies and you must pay particular attention in a long and drawn-out battle.

Most skeletons continue to use whatever weapons they possessed before they died and so their strength in battle can seem to vary greatly depending on what they have the fortune to be equipped with."
―Capcom official description[1]

In addition to witnessing these techniques, it is necessary for Pawns to participate in killing 300 Skeletons either with their own Arisen or while travelling with others.

"Bones...Walking bones!"
"They rampage indiscriminately!"
"This skeleton is skilled indeed."
"A skeleton comes!"

Retrieved from "https://dragonsdogma.fandom.com/wiki/Skeleton?oldid=316608"
Community content is available under CC-BY-SA unless otherwise noted.