Sixfold Bolt is an ice based skill available in Dragon's Dogma.

An upgrade to Threefold Bolt that shoots six ice based magickal arrows that will home onto one foe. In Dark Arisen, it may be upgraded to Ninefold Bolt with the relevant Magick Bowman's Ring or Magick Bowman's Band equipped.

Both the "seeker" and the multiple "hunters" damage foes. Generally each has a small base component and scales well with total magick. 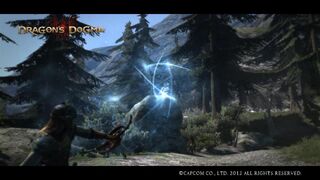 Retrieved from "https://dragonsdogma.fandom.com/wiki/Sixfold_Bolt?oldid=311525"
Community content is available under CC-BY-SA unless otherwise noted.