Shrine of Futile Truths is a location in Dragon's Dogma: Dark Arisen.

The Shrine of Futile Truths is first entered from the Gutter of Misery's second floor and exits into the Corridor of Emptiness on the first floor. The Shrine is a large circular open arena bordered with a spiral staircase that descends to its lower floor. It is illuminated by moonlight shining through the oculus at its zenith.

Pre-Daimon: once the Arisen reaches the first arch on the staircase, the Gazer will descend from the ceiling and engage the party. The Arisen has to kill the Gazer in order to unlock the door to the Corridor of Emptiness, leading to a shortcut to Bitterblack Isle Harbor and to the deeper parts of Bitterblack Isle.

Post-Daimon: the Arisen may just run past the Gazer to unlock the shortcut, defeating it is not required anymore. If the Arisen does slay the Gazer, it will respawn after 5 - 7 days.

Plants and fungi found here include 7 Kingwarish, 10 Lunanise, 5 Cragshadow Morels, and 3 Crimplecaps; whilst the lode obtainable from ore deposits include Hunk of Platinum, Sand-Layer Ore, Lava Rock, and Gold Ore.

A Macabre Sculpture is located on the bottom floor in the center of the shrine. 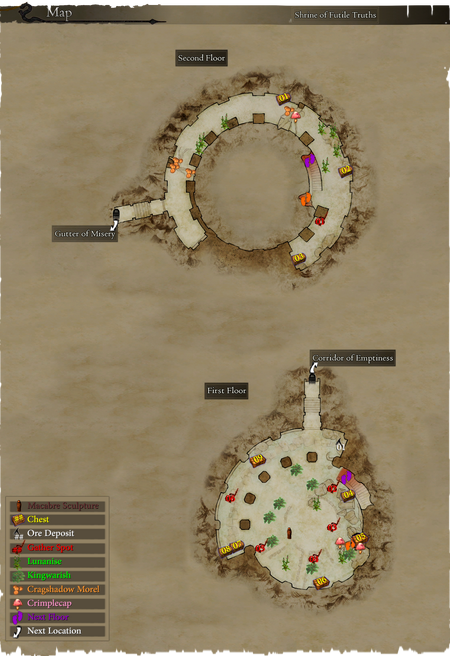 Retrieved from "https://dragonsdogma.fandom.com/wiki/Shrine_of_Futile_Truths?oldid=317473"
Community content is available under CC-BY-SA unless otherwise noted.