Ser Tulius is an NPC in Dragon's Dogma.

Ser Tulius is one of the three soldiers guarding a dead Cockatrice during the second set of the Royal Orders Quests outside of Gran Soren, north of the old stone bridge leading to the Conquest Road. He's accompanied by Ser Morrison and Ser Rustom.

"What say you, Arisen? Quite the prize, eh? 'Twas I what found it, though I'll claim no glory in the beast's death. Seems the Maker's at last taken note of all my good deeds!" 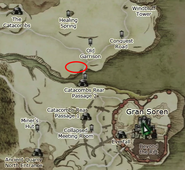 location of the 3 soldiers guarding a dead Cockatrice.

Add a photo to this gallery
Retrieved from "https://dragonsdogma.fandom.com/wiki/Ser_Tulius?oldid=282641"
Community content is available under CC-BY-SA unless otherwise noted.