All Hours
Ser Berne is an NPC in Dragon's Dogma.

"A strong and well-built soldier with a unique combat philosophy. He is in charge of training the soldiers at the Encampment."

Ser Berne trains the main character with various tasks. Later, he can be dueled in the Encampment. Like Lord Julien, Ser Berne is surprisingly helpful when escorted and is a capable Warrior.

He is usually found near the Training Grounds of The Encampment.

"Seems your training has come to bear fruit, eh, Arisen?"
"You see it, don't you? The flow of one blow into the next in perfect harmony... A master fights efficiently. Gracefully.
"I once saw it clear, myself, though I catch only shadows and glimpses now. Perhaps I've naught left to teach."

"Things have taken a dark turn indeed... Still, a warrior who loses composture loses the day. Remember that. I'll not let omens stay my training, no matter how dire. We need hone our edge keener than ever now, Arisen." 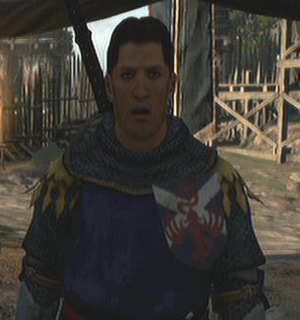 Add a photo to this gallery
Retrieved from "https://dragonsdogma.fandom.com/wiki/Ser_Berne?oldid=309340"
Community content is available under CC-BY-SA unless otherwise noted.