"Learn what you can of Salvation, a secret society that worships the Dragon and sows chaos."

This quest is one of four Wyrm Hunt Quests that can be obtained from Ser Maximilian once the Arisen has received the Wyrm Hunt License.

Seeking Salvation requires the Arisen to investigate a nihilist cult known as Salvation and report back to Ser Maximillian - the Arisen must track down its members and find their meeting place.

The quest is obtained by speaking with Ser Maximilian in the Noble Quarter and selecting “Investigate a cult” from his available quests.

First obtain more information about Salvation. Head over to the Union Inn and speak with Meridith. He will direct the Arisen to a man named Mason.

Several inhabitants of Gran Soren are involved in Salvation, but only Ser Sairus is able to give useful information. He can be found on the path down to the Aqueduct behind the Union Inn. Ser Sairus will say he heard a scheduled Salvation gathering was to take place deep in the Catacombs. 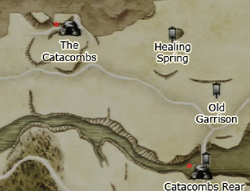 The Catacombs have one main entrance. Other entrances exist but are initially blocked by barred doors.

The Catacombs main entrance is reached by travelling west and north from Gran Soren. Pass over the river bridge and take the western left hand route to the Deos Hills. Some time along the path, a track leads north and in a small valley a little up ahead, a new path will lead to the white stone building of the Catacombs’ main entrance. Next to the entrance is a Riftstone.

Enter the Catacombs and follow the corridor. The Catacombs are infested with Undead and other hazards, and contain a fair amount of wealth. At several points, doors require opening by levers. Eventually the path leads to an elevator which gives access to the lower area of the tombs.

In the lower levels further Undead, Skeletons and Phantoms will be encountered - eventually the Catacombs open out into a natural underground chasm leading to a cave with an Ogre. After the cave is another chasm, which then re-enters a large hall within the man-made Catacomb tombs.

There are two exits out of the halls - the southern one leads to a barricaded door, beyond which is a ladder to the surface - the barricade can be destroyed to allow a second route into the Catacombs. The western path leads via a spiral circuit to the Gathering Hall in which the Salvation meeting is taking place.

By now, the Arisen should begin to hear someone preaching behind the door ahead. It is locked, however, so continue north through the corridor and proceed up the ledge and stairs to spy on the meeting in the Gathering Hall. As the Arisen and party approach, Elysion's voice is haranguing his congregants. Continue until a ledge overlooking the meeting is reached. Here pawns will advice to be careful not to make a noise to give away the party's presence. The Elysion's discourse can be listened to until its end, or interrupted. Once aware of the party's presence, the Elysion will use magick to destroy the ledge. He then summons a group of Undead to murder his own followers while the Night's Champion quietly leaves via the back exit.

Elysion has created a massive swarm of Undead. He laughs and leaves the swarm to fight the Arisen and pawns.

In order to proceed, the summoned Undead must be vanquished. They will come in two waves, but Fire enchantments and spells will make short work of them. Once finished, continue to pursue the Elysion.

Mason has also found the Catacombs and unlocks the door. Proceed through the door to meet up with him.

Entering the next room initiates the Justice Done subquest - here the Arisen must choose whether to kill or spare the captured Salvation member Marcelo - their decision will have consequences for their relationship with Mason (see Justice Done for details).

Once the Arisen has made their choice, proceed to the exit of the Catacombs. Another barricaded door can be unlocked, leading to the "Catacombs Rear Passage 2" exit which is located under the bridge to the north of Gran Soren.

Make way back to the Capital. Speak to Ser Maximilian in Gran Soren to complete the quest.

"I'd wager not many truly believe cult's talk of destruction being renewal. But we all need to vent our problems, aye? And the poorest folk doubly so. They attend Salvation's gatherings to forget their woes for a spell, seems to me."

"A gathering in the crypts, is it? There's more than one way into the catacombs. Nearest to here's northwest, across the river. My thanks for the tip, friend. I'll be there to tend to a few matters myself."

"Tis our curse that the soul must exist in such incompletion while we remain in this material coil. And it is in that incompletion of the soul that all human suffering, pain, and lamentation finds its inexorable source. Whence, then, is salvation? Tis not to be found in pleasure. For pleasure is but another manifestation of the soul's inchoateness. A distraction born of the flesh. Is it but pain's shadow, and no less a transient illusion. For the soul cannot find true pleasure in this world. This world which writhes and struggles against its failings, bludgeoned by its own heedless throes. In a true and proper world, all souls would forever remain in an even state, perfect and complete as they are unchanging. Where can we look to find such balance? Wherein lies the equilibrium our tortured world seeks? In the dragon! Bestower of fear to all man in equal measure. The dragon is the force by which the world will right itself, and we are duty bound to cede our souls unto it. If we seek freedom from pain unending and comfort in the constancy of the soul made complete, we must submit to its fiery arbitration. Think not of this as surrender, nor as the escape of the weak or the craven. No! I bid you, do not run from fear. Do not hate it. For it is fear which rarefies and distills the soul unto its rightful, lofty character."

"Unto all things, death and chaos!" 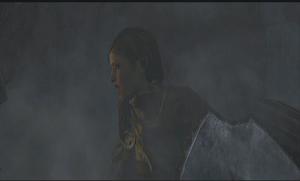 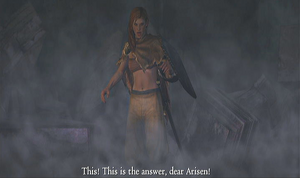 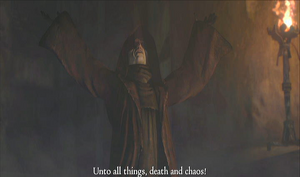 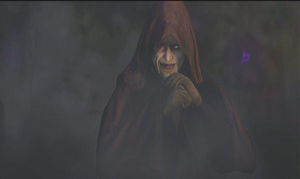 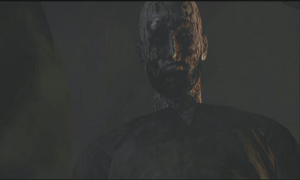