Seabreeze Trail is a location in Dragon's Dogma.

A common trail that connects Cassardis and The Encampment, and to the Manamia Trail beyond. At path leading from the Witchwood via a tunnel exits onto the area near the trail via a high level ledge that is difficult to access from the trail. To the north of the path, on the seaward side is the Unusual Beach, accessed by three paths leading down to it.

Goblins and Wolves are commonly found here, as well as Rabbits and Seabirds. In Post-Game the path is inhabited by Grimgoblins and Hellhounds.

The travelers Cedric, Drew, Kellen, Ralph, and Sion are often seen on the path as are the guards Ser Azarel, Ser Reed, and Ser Wyckes.

During the day the Sunbright flower is found in the area. The herb Nightcry is native to the Trail. Apart from minor detritus there is little else of worth to be harvested or gathered. Some Ore deposits near the waterline on the beach give common ores like Copper Ore.

"Roots of this sort of tree oft yield useful herbs and other plants."

"Perhaps we'll find ore among the crags that litter this place." 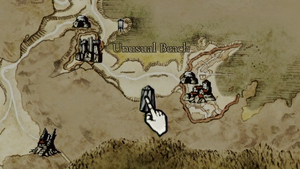 Location of ledge leading to the Witchwood
Add a photo to this gallery
Retrieved from "https://dragonsdogma.fandom.com/wiki/Seabreeze_Trail?oldid=316376"
Community content is available under CC-BY-SA unless otherwise noted.