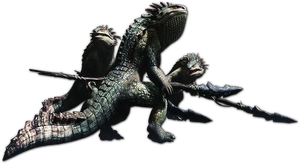 Saurians (called Lizardmen in the Japanese version) are enemies in Dragon's Dogma.

The common Saurian is the least dangerous of the Saurian species, but nevertheless a potent foe. They generally inhabit watery areas, either ponds or riverbanks, but are also found in sheltered woods. Common Saurians have green or greenish scales; they sometimes cloak themselves - which renders them nearly invisible - but not as regularly as their cousins, the Sulfur Saurians.

They are immune to poison, vulnerable to torpor, ice, and as with all Saurian versions, their weakness is the tail. Saurians are good swimmers, use spears for strong physical attacks, and their spit can inflict poison.

"Saurians are mostly found around water and have an appearance like bipedal lizards. They reach around ten feet in height and feed mostly on fish and animals.

Saurians are moderately intelligent and possess a sort of social structure, tending to operate in groups called basks. Most basks of saurians will have one of their own stand guard, usually while camouflaged, so exercise great caution around areas likely to be home to saurians.

They surpass humans in terms of brute strength and explosive power, and they can use their hunting harpoons as weapons. They can also spit poison from their mouths and quickly slither close to take a bite out of their foes.

A saurian’s body is covered with tough scales that cannot be penetrated by many attacks. These scales can also change color in response to the environment and thus saurians can disguise themselves to blend into their surroundings, all the better to ambush their prey. They call this ability "camouflaging".

If you damage a saurian’s tail, it appears to lose the will to fight and will usually flee from battle. No one knows exactly why this is, but scholars theorize that a lost tail might demonstrate to others—especially potential mates—poor fitness, thus damaging a saurian’s social standing."
―Capcom official description[1]

During the quest Deeper Trouble, a larger than normal Saurian is encountered - the regular Saurians appear to look up to this large Saurian as their leader, and since it dwells in a cave full of Saurian eggs, it may be that this is Saurian "queen" or "king".

Though similar in size to a Giant Saurian, this unique creature cannot be climbed, but it can be grappled and carried. 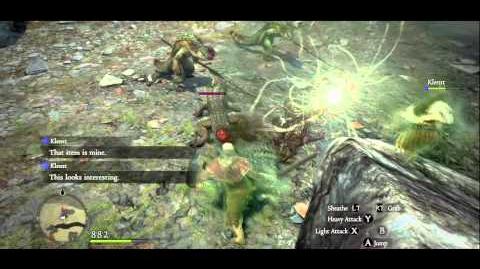 In addition to witnessing these techniques, it is necessary for Pawns to participate in killing 300 Saurians either with their own Arisen or while travelling with others.

"It has the look of a reptile."
"Gah! 'Tis a giant lizard!" (no Bestiary knowledge)
"Those scales and spears are an unwelcome combination."
"Saurian!"
"The tail is severed!"
"Strike the tail!"
"Taste my wrath, reptile!"
"The scales atop their head are soft."
"The scales along their back are hardest of all."
"Their spittle is fell poison!"
"Their cold blood cannot abide ice!"
"Their spears have long reach."

A Saurian's jump attack.
Add a photo to this gallery

Retrieved from "https://dragonsdogma.fandom.com/wiki/Saurian?oldid=321292"
Community content is available under CC-BY-SA unless otherwise noted.